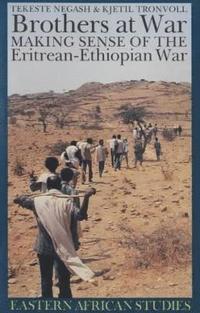 Brothers at War - Making Sense of the Eritrean-Ethiopian War

Future works may fill in gaps and stretch the time frame to include the end of the war and the diplomatic road that led to the Peace Agreement of December 12, 2000, but few will match Brothers at War for its objectivity, access to key players, and historicity. If the Eritrean-Ethiopian war puzzles you, buy this book. - Charles Schaefer in AFRICAN STUDIES REVIEW The authors of Brothers at War provide a crisp and informed account of the circumstances and events that led to the tragic conflict. Writing in fast-paced prose, they succeed in making sense of a war that has been universally condemned as senseless. - Gebra Tareke in IJAHS Suffice to say that this book is essential reading and very helpful in elucidating much of the background to this tragic conflict and the peculiar autocratic leaderships that led to it. - Jon Abbink in AFRICAN AFFAIRS ...the book does on the whole provide a useful introduction to the issues surrounding the border war. In fact, the substantive text itself occupies only 101 pages; the remaining third of the volume being numerous appendices, comprising significant governmental documents concerning the war and attempts to resolve it ... As such, the text does usefully bring together a wide range of material: internet sourced materials, periodicals, government propaganda, and interviews with Eritreans and Ethiopians, all of which are useful for those with little background knowledge of the conflict ... the text does present both the Eritrean and the Ethiopian positions on several issues ... the authors provide a particularly good account of the failure of international diplomacy - and of the relative lack of international resources and attention given to these negotiations, compared with European conflicts. - Sara Rich Dorman in DEMOCRACY & DEVELOPMENT

Bloggat om Brothers at War - Making Sense of the Eri...