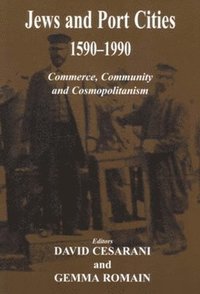 David Cesarani is Research Professor in History at Royal Holloway, University of London. From 2000 to 2004 he presided over the port Jews project as Director of the AHRB Parkes Centre for the Study of Jewish/non-Jewish Relations, Southampton University. His publications include (ed.) Port Jews: Jewish Communities in Cosmopolitan Maritime Trading Centres, 1650-1950 (2002), and Eichmann: His Life and Crimes (2004). Gemma Romain works at The National Archives, Kew on a Heritage Lottery Fund project, 'Your Caribbean Heritage', cataloguing and researching colonial office correspondence from the British Caribbean. Her postdoctoral fellowship at the AHRB Parkes Centre, University of Southampton, explored diasporic and ethnic identities of Jews in Charleston, South Carolina, and Jamaica. She is the author of Connecting Histories: A Comparative Exploration of African-Caribbean and Jewish History and Memory in Modern Britain (2005). She was a researcher and writer for the 'Connections: Hidden British Histories' exhibition exploring Asian, Caribbean and Jewish history in Britain.