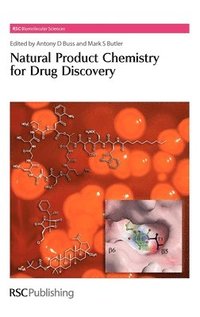 av Antony D Buss, Mark S Butler
Inbunden Engelska, 2009-10-01
1579
Köp
Spara som favorit
Skickas inom 7-10 vardagar.
Fri frakt inom Sverige för privatpersoner.
Natural Product Chemistry for Drug Discovery provides a comprehensive summary of where natural product chemistry is today in drug discovery. The book covers emerging technologies and case studies and is a source of up-to-date information on the topical subject of natural products. The authors, all experts in their respective fields, provide compelling arguments as to why naturel products should be considered important tools in the drug discovery process. The book will appeal across the board from scientists to professionals, postgraduates and industrial chemists. The case studies selected for inclusion highlight recently marketed drugs and development candidates that have been derived from natural products. These 'real-life' examples show how new technologies, such as advances in screening, isolation, dereplication and prefractionation, have significantly enhanced the discovery process.
Visa hela texten

"This volume serves as a useful reminder that even as the first decade of the 21st century comes to a close, natural products are still a valuable resource for the new therapeutic agents and new drug leads with broad structural diversity.""This is a timely and highly informative text that belongs in institutional libraries where biomedical research is carried out...many natural product researchers, as well as medicinal chemists, synthetic organic chemists, and pharmacologists will find this volume well worthy of purchase for their personal libraries." * Journal of Medicinal Chemistry, 2010, 53 P2329 *

Dr A.D. Buss graduated from the Royal Institute of Chemistry before receiving his MSc from the University of East Anglia and then a PhD from the University of Cambridge. He started his career in the pharmaceutical industry with Pfizer before moving to Schering Agrochemicals as a Team Leader. In 1989, he joined Glaxo as Research Manager prior to becoming Head of the Natural Products Discovery Department and, finally, Research Unit Head, Bioprocessing, in 1995. During this period, Dr. Buss served as Chairman of the GlaxoWellcome (UK) Research Management Team and Chairman of the Joint Project Team (combinatorial polyketide biosynthesis) for what was GlaxoWellcome's largest research collaboration with the University of Cambridge. In 2000, he became head of the Centre for Natural Product Research at the Institute of Molecular and Cell Biology in Singapore and, on the Centre's privatisation to MerLion Pharmaceuticals in May 2002, became its President and Chief Executive Officer. Dr Buss is the author or co-author of over fifty peer reviewed scientific publications. Dr Mark S. Butler received his BSc (Hons) and PhD from The University of Melbourne. After postdoctoral work at the Arizona State University, he joined the Queensland Pharmaceutical Research Institute (now Natural Product Research). He then moved to Singapore to lead the Natural Product Chemistry group at the Centre of Natural Product Research (CNPR), which was part of the Institute of Molecular and Cell Biology (IMCB). In 2002, CNPR privatized to become MerLion Pharmaceuticals where his present position is Director of Natural Product Chemistry. He has contributed to over 40 papers on various aspects of natural products chemistry and, in 2002, was awarded the Matt Suffness (Young Investigator) Award by the American Society of Pharmacognosy.

Chapter 1: Natural Products as Drugs and Leads to Drugs: the Historical Perspective; Chapter 2: Chemical Space and the Difference between Natural Products and Synthetics; Chapter 3: The Importance of Mechanism of Action Studies; Chapter 4: The Convention on Biological Diversity and its Impact on Natural Product Research; Chapter 5: Plants: Revamping the Oldest Source of Medicines with Modern Science; Chapter 6: Macromarines: a Selective Account on the Potential of Marine Sponges, Molluscs, Soft Corals and Tunicates as a Source of Therapeutically Important Molecular Structures; Chapter 7: Microorganisms: their Role in the Discovery and Development of Medicines; Chapter 8: Advances in Biological Screening for Lead Discovery; Chapter 9: Advances in Instrumentation and Automation, Dereplication and Prefractionation; Chapter 10: Natural Product Combinatorial Biosynthesis: Promises and Realities; Chapter 11: A Snapshot of Natural Product-Derived Compounds in Late Stage Clinical Development at the End of 2008; Chapter 12: From Natural Product to Clinical Trials: NPI-0052 (Salinosporamide A), a Marine Actinomycete-Derived Anticancer Agent; Chapter 13: From Natural Product to Clinical Trials: Bevirimat, a Plant-Derived Anti-AIDS Drug; Chapter 14: Daptomycin; Chapter 15: Micafungin; Chapter 16: From rapamycin to temsirolimus;