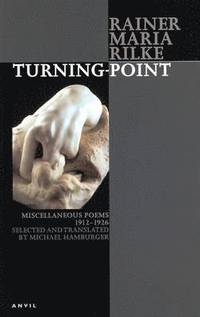 av Rainer Maria Rilke
Häftad Engelska, 2003-05-01
115
Köp
Spara som favorit
Skickas inom 5-8 vardagar.
Gratis frakt inom Sverige över 159 kr för privatpersoner.
First published under the title "An Unofficial Rilke", Hamburger's translations have been critically acclaimed for their contribution towards a more complete understanding of one of the major poets of the 20th century. While Rilke has been perhaps more widely translated into English than any other modern poet, the emphasis has always been on 'major works' - the "New Poems" volumes, "Duino Elegies" and "Sonnets to Orpheus". Yet Rilke produced many more poems which had little or no airing beyond the confines of his workshop. Michael Hamburger argues in his perceptive and entertaining introduction that these poems are not inferior to the poems in the collections that form the accepted corpus; rather that they merely failed to fit in with Rilke's wish to form a definitive statement.
Visa hela texten

Michael Hamburger (1924-2007) was born in Berlin and came to Britain in 1933. Among the many authors he has translated from are Holderlin, Goethe, Paul Celan and Peter Huchel. He is equally acclaimed as one of Britain's leading poets of the period since World War II. Anvil publishes his 'Collected Poems 1941-1994' and his subsequent collections.