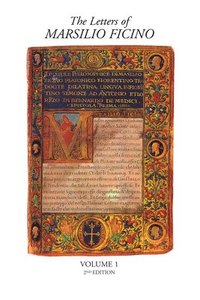 The Letters of Marsilio Ficino: No. 1

av Arthur Farndell
Inbunden Engelska, 2018-09-17
329
Köp
Spara som favorit
Skickas inom 5-8 vardagar.
Fri frakt inom Sverige för privatpersoner.
MARSILIO FICINO of Florence (1433-99) was one of the most influential thinkers of the Renaissance. He put before society a new ideal of human nature, emphasising its divine potential. As teacher and guide to a remarkable circle of men, he made a vital contribution to changes that were taking place in European thought. For Ficino, the writings of Plato provided the key to the most important knowledge for mankind, knowledge of God and the soul. It was the absorption of this knowledge that proved so important to Ficino, to his circle, and to later writers and artists. As a young man, Ficino had been directed by Cosimo de' Medici towards the study of Plato in the original Greek. Later he formed a close connection with Cosimo's grandson, Lorenzo de' Medici, under whom Florence achieved its age of brilliance. Gathered round Ficino and Lorenzo were such men as Landino, Bembo, Poliziano and Pico della Mirandola. The ideas they discussed became central to the work of Spenser, Shakespeare, Donne, Botticelli, Michelangelo, Raphael, Durer, and many other writers and artists. The first letter in this volume is from Cosimo to Ficino, inviting him to visit him on his estate at Careggii and to bring with him `Plato's book on The Highest Good' (the Philebus) which Cosimo had asked him to translate in 1463. Though there is some uncertainty about the precise nature of Ficino's Platonic Academy, in another letter he replies to a correspondent's request for `that maxim of mine that is inscribed around the walls of the Academy'. This revised edition has corrected errors made in the original translation more than four decades ago, and the notes to the letters and the biographical notes have incorporated much new material from scholarship on the period which has grown enormously in the intervening years and continues to flourish.
Visa hela texten

"...so well translated, so well annotated and so beautifully produced that it is a pleasure to read and possess." A. Hamilton in The Heythrop Journal // "A remarkable achievement. Such giants as Ficino deserve a wider audience." Umberto Eco, author of The Name of the Rose // "From every point of view it is a pleasure to read this perfect introduction to one of the most attractive and influential figures of the Italian Renaissance." C.V. Wedgwood in The Daily Telegraph

Bloggat om The Letters of Marsilio Ficino: No. 1

Arthur Farndell (editor) has been a member of the team of scholars at the School of Economic Science in London for more than 40 years. He is also the translator of many of Marsilio Ficino's commentaries on Plato's Dialogues which have been published in five volumes as All Things Natural, Evermore Shall Be So, Gardens of Philosophy, On the Nature of Love, and When Philosophers Rule.