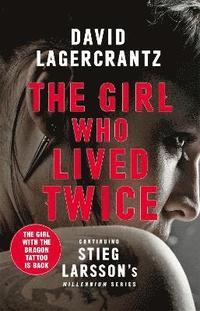 The Girl Who Lived Twice

av David Lagercrantz
Inbunden Engelska, 2019-08-22
219
Köp
Spara som favorit
Skickas inom 7-10 vardagar.
Gratis frakt inom Sverige över 159 kr för privatpersoner.
Finns även som
Visa alla 2 format & utgåvor
**THE GIRL WITH THE DRAGON TATTOO IS BACK!** **The sixth in the Millennium series - more than 100 million copies sold worldwide** "Expertly told, the plot crackles with life" DAILY MAIL "Salander is centre stage . . . A pacy read" SUNDAY EXPRESS "Exciting and disturbing" LITERARY REVIEW ********************************************************************************** THE GIRL WITH THE DRAGON TATTOO HAS FRESH OUTRAGE TO AVENGE As Salander follows the scorched trail of her twin sister to Moscow, Blomkvist fears for her safety. He should, perhaps, be more concerned for himself. The murder of a homeless man on the streets of Stockholm has drawn him into a conspiracy that scales the heights of Everest and plunges to the depths of Russia's criminal underworld. And now Lisbeth will face her nemesis. For the girl with the dragon tattoo, the personal is always political - and ultimately deadly. "A unique concoction that should leave Salander's legion of followers clamoring for more" Tom Nolan, Wall Street Journal Translated from the Swedish by George Goulding
Visa hela texten

A murder mystery inside an espionage conspiracy wrapped in an action thriller-a unique concoction that should leave Salander's legion of followers clamoring for more -- Tom Nolan * Wall Street Journal * Larsson had grand ambitions for his Millennium series, projecting a total of 10 novels. In Lagercrantz's hands, the series is realizing grand ambitions of another sort. -- Maureen Corrigan * Washington Post * He has developed Larsson's rage at right-wing perfidy and men who hate women, mixing it with his ability to depict physical beauty and superhuman survival skills to create fast-paced thrillers . . . The Girl Who Lived Twice is both exciting and disturbing -- Natasha Cooper * Literary Review * Lagercrantz's compassion for the underdog adds genuine emotion to his baroque plotting. There is much to admire in the way he has grasped a tricky assignment - to continue one of the biggest hits of recent years. Roll on the next "girl" -- James Kidd * South China Morning Post * Salander is centre-stage again in Lagercrantz's latest sequel . . . This is a pacy read . . . while still finding room for some nice eccentric touches -- Jake Kerridge * Sunday Express * David Lagercrantz is a pro. This is stylish, straight forward, classic Swedish crime . . . supporting characters are distinctly illustrated, larger than life . . . the dialogue is voluble; full of knives, Berettas, rich Russians and divinely gifted hackers. * Svenska Dagbladet * A book to devour . . . Difficult, or near impossible to put down, the plot is lavish, complex, remarkably well-composed and filled with unbearable suspense in certain places * Le Parisien * Salander is what she's always been: a force to be reckoned with, and one of the most remarkable series leads in the history of crime fiction. Salander fans, who long ago put aside any misgivings about Lagercrantz taking over the Millennium series, will be eager to follow the Girl with the Dragon Tattoo as she attempts to sweep clean her family closet. * Booklist * A tantalizing ending hints at important changes for Blomkvist and Lisbeth ahead. Series fans will be pleased with the thoughtful way Lagercrantz develops the character of their beloved action heroine in this worthy outing. * Publishers Weekly * The Girl Who Lived Twice is the sixth, last and best from Stieg Larsson's universe. It is a vivacious and suitable conclusion of the Millennium saga * Aftenposten * David Lagercrantz has with professionalism and respect consolidated Lisbeth Salander as an archetype of current pop culture, and at the same time written very entertaining novels. * La Vanguardia * The result will satisfy any Lagercrantz fans, since the story goes on without pause until the last page, where the author uses fireworks to surprise the reader. * El Periodico * A great novel made of twists and turns, cliffhangers and detailed researches. Lagercrantz . . . An accomplished and elegant style . . . One of the most beautiful and innovative series of the last two decades. * La Repubblica * Lagercrantz perfectly knows how to embrace the atmosphere and the suspense of the Stieg Larsson saga. * Corriere della Sera * [A] fast-paced adventure -- Miles McWeeney * Irish Independent *

David Lagercrantz was born in 1962, and is an acclaimed author and journalist. In 2015 The Girl in the Spider's Web (2015), his continuation of Stieg Larsson's Millennium Trilogy, became a worldwide bestseller and was made into a film by Sony Pictures (2018). He is the author of the acclaimed and bestselling I am Zlatan Ibrahimovic, Fall of Man in Wilmslow, and the fifth and sixth books in the Millennium series, The Girl Who Takes an Eye for an Eye (2017) and The Girl Who Lived Twice (2019). George Goulding was born in Stockholm, educated in England, and spent his legal career working for a London-based law firm. He is now a translator of Swedish literature into English, including David Lagercrantz's continuations of the Millennium trilogy by Stieg Larsson.