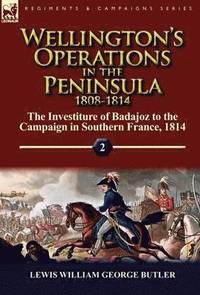 Wellington's Operations in the Peninsula 1808-1814

Volume 2-The Investiture of Badajoz to the Campaign in Southern France, 1814

The author of this history of Wellington's Peninsular War, Captain Lewis Butler of the Rifles, declares himself at the outset to be a disciple of William Napier and an enthusiastic student of that 'incomparable classic' for which Napier is principally known. His objective is to provide a 'concise' history of the conflict for those who may lack the capacity or time to engage with Napier's massive opus. Readers should note that the author actually sells himself somewhat short. In fact, Butler's work encompasses the entire war-not confining itself only to Wellington's involvement as his title suggests. Within the two substantial volumes-concise being a relative term-of his history he gives us his own narrative of the war in an easy to read but thorough and engaging style. Modern students have often taken the criticism (by others) of Butler's mentor Napier as 'given wisdom.' Much controversy concerning Napier's history originated from those involved in the war, who had personal reasons for taking exception to his perspectives, this did not therefore mean that he was inevitably wrong. The view that his is an overworked reference in no way detracts from its value-particularly for those not familiar with it. Furthermore, Butler points out that his history contains 'certain points of military detail which are omitted from or in all events not prominently brought forward' by Napier in his work. The coy tone and often apologetic conventions of 19th century prefaces are often not in the best service of the reader in enabling one to appreciate the full merits of the work in hand. Modern readers may be assured that Butler's is an excellent, original account in its own right and not-irrespective of the value of such a work-an edited rewrite of Napier. It will both interest general readers and be a valuable addition to every library of the history of the Napoleonic Wars.

Volume two of Lewis Butler's history commences with the state of the war in the northern, eastern and southern provinces of Spain before dealing with Badajoz, Cuidad Rodrigo's fall and the long and arduous campaigns that led to the pivotal engagement at Vitoria. The pursuit of the French across the Pyrenees and the battles upon French soil are complemented by an account of the Siege of San Sebastian. Available in softcover and hardback with dustjacket.
Visa hela texten