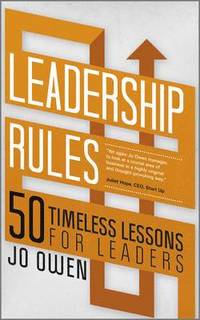 av Jo Owen
Häftad Engelska, 2011-11-22
129
Köp
Spara som favorit
Skickas inom 5-8 vardagar.
Fri frakt inom Sverige för privatpersoner.
Finns även som
Visa alla 2 format & utgåvor
From the man behind the bestselling How to series comes more essential business wisdom...and this time, it's nicely broken up into 50 digestible nuggets. This is dip-in, dip-out content - easily read, understood and implemented and complete with engaging illustrations. There are a handful of truly inspired and inspirational leaders in the world - you know who they are... and probably wish you were one of them. But leadership isn't easy - some say it's an innate quality, a natural skill that only a select few demonstrate - but this thinking is nonsense, according Jo Owen. We can all become respected and effective leaders if we just follow some fundamental rules. Jo has studied what makes leaders effective everywhere - from the world's leading banks and management consultancies, to the world's oldest tribes in Africa. And he has distilled his observations into 50 practical rules that we can all follow and use to become the leaders we aspire to be.
Visa hela texten

Jo Owen is a bestselling business author, leader, social entrepreneur and speaker. His business experience ranges widely. He was the best nappy salesman in Birmingham and put the blue speckle in Daz. He led a business in Japan for three years, has been a partner at Accenture, and was the architect of what is now HBOS business banking. He has co-founded three charities: Teach First, which is now one of the UK's top graduate recruiters, Future Leaders, which develops head teachers for urban schools and StartUp, which helps offenders start their own businesses on release from prison. He is in demand as a speaker on leadership, change, organisation, strategy and the corporate tribe. He also blogs on the BNet website and has contributed to Director Magazine, the FT and the Independent. His previous books include Hard-Core Management (Kogan Page, 2003) How to Lead (Pearson, 2005, second edition 2009); How to Manage (Prentice Hall, 2006, second edition 2009); Management Stripped Bare (Kogan Page, 2006), Power at Work: The Art of Making things Happen (Prentice Hall, 2007), How to Influence (Prentice Hall, 2009), and How to Sell (Prentice Hall, 2009).