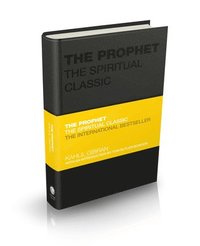 av Kahlil Gibran, Tom Butler-Bowdon
Inbunden Engelska, 2020-03-26
108
Köp
Spara som favorit
Part of the bestselling Capstone Classics Series edited by Tom Butler-Bowdon, this collectible, hard-back edition of The Prophet provides an accessible and insightful introduction to this timeless spiritual work The Prophet is an inspirational book of 26 poetry fables written in English by Lebanese-American poet and writer Kahlil Gibran. One of the most translated books in history, Gibran's famous work has been translated into over 100 different languages since its first publication in 1923. The book provides timeless spiritual wisdom on universally-shared aspects of life, such as giving, buying and selling, beauty and friendship, eating and drinking, crime and punishment and spirituality and religion. The book follows Almustafa, a man who has waited for twelve years for a ship to take him from the island of Orphalese back to his home. He has come to know the people on the island, who consider him a wise and insightful man. On the day Almustafa's ship finally arrives, he feels a deep sadness. The local elders ask him not to leave. Almustafa speaks of his philosophy of life and the truths he has discovered to the gathered crowd. His words have an almost magical quality to them. As he prepares to board his ship, it becomes clear that Almustafa's words do not refer to his journey home, but rather to the world he came from before he was born. The Prophet is a metaphor for the mystery of life and an exploration of the human condition. Inspirational and extremely readable for modern audiences, this classic text teaches us: We should be glad of the experience of coming into the world The separation you feel from other people is not real True marriage gives both people space to develop their individuality Enjoying your work is expressing your love for whoever benefits from it Sorrow makes space for more joy in another season of life Featuring an insightful introduction from the editor, The Prophet: The Spirituality Classic is a must-read book for anyone interested in exploring the undeniable truths of life we all share.
Visa hela texten

Kahlil Gibran was a Lebanese essayist, novelist, poet, and artist. He was born in Lebanon in 1883, but moved to America with his mother and four siblings in 1895, where he enrolled in art classes in Boston. After spending two years studying art in Paris, Gibran's artistic and literary career began. The Prophet published in 1923 achieved worldwide fame, and has never been out of print since. Tom Butler-Bowdon is series editor for the Capstone Classics series. He has written Introductions for Capstone editions of Plato's The Republic, Machiavelli's The Prince, Adam Smith's The Wealth of Nations, Sun Tzu's The Art of War, Lao Tzu's Tao Te Ching, and Napoleon Hill's Think and Grow Rich. Tom is the author of the 50 Classics series and is a graduate of the London School of Economics and the University of Sydney.