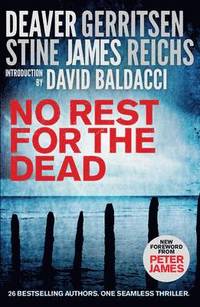 No Rest for the Dead

av Jeffrey Deaver, David Baldacci, Alexander McCall Smith, Kathy Reichs, Peter James
(1 röst)
Häftad Engelska, 2012-08-01
99
Bevaka
Spara som favorit
Tillfälligt slut – klicka "Bevaka" för att få ett mejl så fort boken går att köpa igen.
When Christopher Thomas, a curator at San Francisco's Museum of Fine Arts, is murdered and his decaying body is found in an iron maiden in Berlin, his wife Rosemary Thomas is the prime suspect. Long suffering under Christopher's unfaithful ways, Rosemary is tried, convicted and executed. Ten years later, Jon Nunn, the detective who cracked the case, becomes convinced that the wrong person was put to death. Along with financier Tony Olsen, he plans to gather everyone who was there the night Christopher died and finally uncover the truth about what happened that fateful evening. Could it have been the ne'er do well brother Peter Hausen, interested in his sister's trust fund having got through his own; the curatorial assistant Justine Olengard, used and betrayed by Christopher; the artist Belle who turned down his advances only to see her career suffer a setback; or someone else all together? No Rest for the Dead is a thrilling, page-turning accomplishment that only the very best thriller writers could achieve.
Visa hela texten

David Baldacci is a worldwide bestselling novelist. With his books published in over 45 languages and in more than 80 countries, and with over 110 million copies in print, he is one of the world's favorite storytellers. David Baldacci is also the cofounder, along with his wife, of the Wish You Well Foundation, a nonprofit organization dedicated to supporting literacy efforts across America. Still a resident of his native Virginia, he invites you to visit him at www.DavidBaldacci.com, and his foundation at www.WishYouWellFoundation.org, and to look into its program to spread books across America at www.FeedingBodyandMind.com. Kathy Reichs's first novel Deja Dead was a #1 New York Times bestseller and won the 1997 Ellis Award for Best First Novel. A Conspiracy of Bones is Kathy's nineteenth entry in her series featuring forensic anthropologist Temperance Brennan. Kathy was also a producer of the hit Fox TV series, Bones, which is based on her work and her novels. Dr. Reichs is one of very few forensic anthropologists certified by the American Board of Forensic Anthropology. She served on the Board of Directors and as Vice President of both the American Academy of Forensic Sciences and the American Board of Forensic Anthropology, and as a member of the National Police Services Advisory Council in Canada. She divides her time between Charlotte, North Carolina, and Montreal, Quebec. Visit Kathy at KathyReichs.com. Peter James is the #1 international bestselling author of the Roy Grace series, with more than eighteen million copies sold all over the world. His novels have been translated into thirty-seven languages and many are in development for TV and film including the Roy Grace series. All of his novels reflect his deep interest in the world of the police, with whom he does in-depth research. He lives in England. Tess Gerritsen left a successful practice as an internist to raise her children and concentrate on her writing. She gained nationwide acclaim for her first novel of medical suspense, the New York Times bestseller Harvest; she followed her debut with the bestsellers Life Support and Gravity (both available from Pocket Books.) Her other novels includes Body Double, The Sinner, The Apprentice, and The Surgeon. Tess Gerritsen lives in Maine.