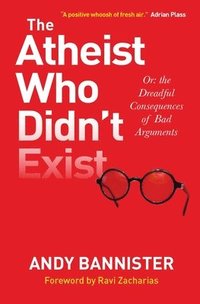 The Atheist Who Didn't Exist

Or the dreadful consequences of bad arguments

av Andy Bannister
Häftad Engelska, 2015-07-24
119
Köp
Spara som favorit
Finns även som
Visa alla 1 format & utgåvor
In the last decade, atheism has leapt from obscurity to the front pages: producing best-selling books, making movies, and plastering adverts on the side of buses. There's an energy and a confidence to contemporary atheism: many people now assume that a godless scepticism is the default position, indeed the only position for anybody wishing to appear educated, contemporary, and urbane. Atheism is hip, religion is boring. Yet when one pokes at popular atheism, many of the arguments used to prop it up quickly unravel. The Atheist Who Didn't Exist is designed to expose some of the loose threads on the cardigan of atheism, tug a little, and see what happens. Blending humour with serious thought, Andy Bannister helps the reader question everything, assume nothing and, above all, recognise lazy scepticism and bad arguments. Be an atheist by all means: but do be a thought-through one.
Visa hela texten

"This is a remarkable and timely book. Apologetics has to mature and evolve into the 21st century and this intelligent, funny and elegant work is precisely what we are looking for." -- Michael Coren, broadcaster, author and journalist "Andy Bannister's book is a breath, a gust, a positive whoosh of fresh air. Made me laugh, made me think, made me cry. The words bounce across the page. A sane Christian! Whatever next?" -- Adrian Plass "Every atheist vs. believer debate I've been to has made me want to gouge out my eyes with a spoon. Bannister's book, however, is exactly what this sceptical believer needed." -- Drew Marshall, radio host "In a brilliant work that is as humorous as it is damaging to atheist arguments, Bannister demonstrates the consequences of implementing new atheist arguments into real life (that is, out of the realm of stuffy office speculations). His work is a wild ride that takes the reader from stories to theory to end game. Writing with eloquence and imagination, he illustrates the supposed `safe ground' of new atheist thought as truly no ground at all." -- Mary Jo Sharp, Houston Baptist University "Andy Bannister provides a set of powerful and accessible arguments that can be used by ordinary people in responding to the tsunami of atheist sound bites flooding public discourse in the West. His tongue-in-cheek humour gives a certain lightness which does not in any way undermine the rigour and force of the book's arguments. This is not a negative study - though atheism is certainly taken to the cleaners - but it is also profoundly positive in presenting compelling arguments for the central claims of Christianity." -- Dr Peter Riddell, Professorial Research Associate, SOAS, University of London "A book that tackles heady things with humor and grace and in a way that ordinary people like myself can actually understand. Highly recommended, I read it twice!" -- Jeff Allen, comedian This book is for you, whether you're an atheist, a doubter, or a believer. In an age of overdone rhetoric that lacks substance, Andy Bannister has done what few writers on the topic of God have done: made it fun and fast paced, yet fair and sincere. Andy has the rare ability to use humor to expose the faulty logic of bad arguments while at the same time being respectful to the people who might use those same arguments. You'll laugh in these pages even as your intellect is stimulated and your thinking is challenged. The Atheist Who Didn't Exist is a thoughtful book that will stimulate the humor and intelligence of the atheists who do exist. I wholeheartedly recommend it! -- Abdu Murray, author of Grand Central Question `It's the "God Debate" but not as you know it. In this conversational, well-researched and accessible volume, Andy Bannister offers an intelligent, provocative and humorous engagement with the New Atheism. Andy asks big questions and challenges some dominant assumptions. Share and Enjoy.' -- Paul Woolley, Executive Director, Bible Society "This is the most enjoyable critique of popular atheism I have read. It is serious fun, by which I mean it somehow offers deeply thoughtful responses to modern scepticism while regularly making you laugh-often laughing at Andy's true wit, sometimes at that `British droll'! Oddly, for such an entertaining riposte of fashionable atheist arguments, the book is remarkably free of smugness and self-congratulation. I could-and will-give this book to my sceptical friends." -- Dr John Dickson, Founding Director of the Centre for Public Christianity, and Honorary Fellow of the Department of Ancient History, Macquarie University "I would especially highlight this book's accessibility. Although it is well endowed with references, its populist, racy style may well appeal to readers who would be unlikely to engage with yet another `academic' treatise on faith and secularism. On these grounds, I recommend it as an

Dr Andy Bannister is the Canadian Director of Ravi Zacharias International Ministries. Andy speaks frequently across Canada, America and Europe to audiences of all faiths and none, in settings ranging from universities to business forums and churches. Before joining RZIM, he had a background in youthwork before moving into academia for a few years, where he gained a PhD in Qur'anic Studies.

Contents Foreword by Ravi Zacharias 11 Chapter 1 The Loch Ness Monster's Moustache (or: The Terrible Consequences of Bad Arguments) 13 2 The Scandinavian Sceptic (or: Why Atheism Really is a Belief System) 30 3 The Aardvark in the Artichokes (or: Why Not All Gods are the Same) 47 4 The Santa Delusion (or: Why Faith in God Does Not Mean You're Insane) 66 5 Aim for That Haystack! (or: Why Psychological Arguments Against Religion Fail) 82 6 Sven and the Art of Refrigerator Maintenance (or: Why Religion Doesn't Poison Everything) 98 7 The Lunatic in the Louvre (or: Why Science Cannot Explain the Entirety of Reality) 118 8 Humpty Dumpty and the Vegan (or: Why We Really Do Need God to Be Good) 140 9 The Peculiar Case of the Postmodern Penguin (or: Why Life Without God is Meaningless) 164 10 The Panini Poisoner of Pimlico (or: Why Everybody Has Faith) 187 11 The Reluctant Eunuch (or: Why We Really Can Know a Lot About Jesus) 209 Acknowledgments 234 Text Credits 237