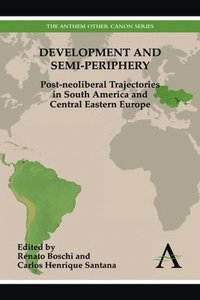 av Renato Boschi, Carlos Henrique Santana
Inbunden Engelska, 2012-03-15
329
Köp
Spara som favorit
Skickas inom 5-8 vardagar.
Fri frakt inom Sverige för privatpersoner.
Finns även som
Visa alla 2 format & utgåvor
This book is a collection of articles focusing on comparative analysis of the development trajectories in the semi-periphery countries of South America and Central and Eastern Europe. The book tries to approach the dilemmas of development in the semi-periphery as diversely as possible, always emphasising the variety of trajectories as a crucial factor. Therefore there are evaluations of the role of cognitive regimes produced by professional fields as elements of collective action coordination and as beacons that fix State-society relations. As opposed to the transitology studies that were prevalent in the 1990s, and that treated the neoliberal context in these two regions separately, the articles in this volume instead offer a new comparative analysis about the consequences of the neoliberal reforms and the new actors that deal with these results.
Visa hela texten