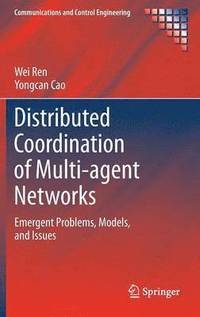 From the reviews: "Some of the essential features of the book: a) an excellent resume of the mathematical results used in the book (with exact references to the sources); b) at the end of each chapter, there are Notes guiding the reader to further studies and giving the sources of the presented material; c) inclusion of many numerical examples and simulations; d) the presence of the sampled data setting which links the analog to the digital approach ... . represents an excellent exposition of the area of DCMaN." (Dumitru Stanomir, Zentralblatt MATH, Vol. 1225, 2012)

Wei Ren received the B.S. degree in electrical engineering from Hohai University, China, in 1997, the M.S. degree in mechatronics from Tongji University, China, in 2000, and the Ph.D. degree in electrical engineering from Brigham Young University, Provo, UT, in 2004. From October 2004 to July 2005, he was a Postdoctoral Research Associate with the Department of Aerospace Engineering, University of Maryland, College Park. Since August 2005, he has been with the Department of Electrical and Computer Engineering, Utah State University, Logan, where he is currently an Associate Professor. He is an author of the book Distributed Consensus in Multi-Vehicle Cooperative Control (Springer-Verlag, 2008). His research focuses on distributed control of multi-agent systems, networked cyber-physical systems, and autonomous control of unmanned vehicles. Dr. Ren was a recipient of the National Science Foundation CAREER Award in 2008. He is currently an Associate Editor for Systems and Control Letters and an Associate Editor on the IEEE Control Systems Society Conference Editorial Board. Yongcan Cao received the B.S. degree from Nanjing University of Aeronautics and Astronautics, Nanjing, China, in 2003 and the M.S. degree from Shanghai Jiao Tong University, Shanghai, China, in 2006, and the Ph.D. degree from Utah State University, Logan, in 2010, all in electrical engineering. His research interest focuses on cooperative control and information consensus of multi-agent systems.