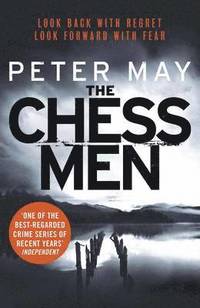 av Peter May
(12 röster)  |  Läs 2 recensioner
Häftad Engelska, 2013-08-15
116
Köp
Spara som favorit
Finns även som
Visa alla 1 format & utgåvor
THE NAIL-BITING, BESTSELLING FINAL CHAPTER IN THE LEWIS TRILOGY 'One of the best regarded crime series of recent years' Independent 'Peter May is a writer I'd follow to the ends of the earth' New York Times PETER MAY: THE MAN WHO BROUGHT MURDER TO THE OUTER HEBRIDES THE NEW START Fin Macleod, now head of security on a privately owned Lewis estate, is charged with investigating a spate of illegal game-hunting taking place on the island. THE OLD FRIEND This mission reunites him with Whistler Macaskill - a local poacher, Fin's teenage intimate, and possessor of a long-buried secret. THE FINAL CHAPTER But when this reunion takes a violent, sinister turn and Fin puts together the fractured pieces of the past, he realizes that revealing the truth could destroy the future. LOVED THE LEWIS TRILOGY? Read Peter May's other Hebrides thrillers, COFFIN ROAD and I'LL KEEP YOU SAFE. LOVE PETER MAY? Buy his latest frontlist thriller, A SILENT DEATH
Visa hela texten

A rip-roaring thriller . . . thoroughly enjoyable * Mail on Sunday * A wonderfully complex book -- Peter James, on Entry Island The Lewis Man shone like a bright star out of this year's book lists. Lyrical, empathetic and moving -- Alex Gray He is a terrific writer doing something different -- Mark Billingham From the first page I knew I was in safe hands. I knew I could trust this writer -- Sophie Hannah Wonderfully compelling -- Kate Mosse Western France - now May's own stamping ground - is as much a character in the book as the Hebrides were in his formidable Isle of Lewis sequence * Guardian * Peter May is a writer I'd follow to the ends of the earth * New York Times * Instantly struck by the beauty of the descriptions of the wild island terrain as well as by the roundedness and complexity of the characterisations * The Times * One of the best regarded crime series of recent years -- Boyd Tonkin, on the Lewis trilogy * Independent * May's novels are strong on place and the wounds left by old relationships * Sunday Times *

Peter May was born and raised in Scotland. He was an award-winning journalist at the age of twenty-one and a published novelist at twenty-six. When his first book was adapted as a major drama series for the BBC, he quit journalism and during the high-octane fifteen years that followed, became one of Scotland's most successful television dramatists. He created three prime-time drama series, presided over two of the highest-rated serials in his homeland as script editor and producer, and worked on more than 1,000 episodes of ratings-topping drama before deciding to leave television to return to his first love, writing novels. In 2021, he was awarded the CWA Dagger in the Library Award. He has also won several literature awards in France, received the USA's Barry Award for The Blackhouse, the first in his internationally bestselling Lewis Trilogy; and in 2014 was awarded the ITV Specsavers Crime Thriller Book Club Best Read of the Year award for Entry Island. Peter now lives in South-West France with his wife, writer Janice Hally.