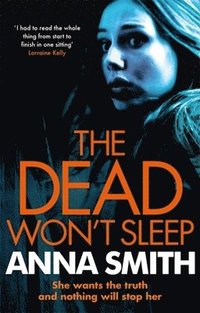 a nailbiting thriller you won't be able to put down!

Grabs you by the scruff of the neck and doesn't let go until its jaw-dropping conclusion * Best * Strongly plotted and very good * Guardian * Anna Smith expertly unveils Glasgow's underbelly in this page-turner. Her knowledge of the city's underclass shines out of every page - a budding new crime talent * News of the World * Rosie is such a believable character ... I had to read the whole thing from start to finish in one sitting * Lorraine Kelly *

Anna Smith has been a journalist for over twenty years and is a former chief reporter for the Daily Record in Glasgow. She has covered wars across the world as well as major investigations and news stories from Dunblane to Kosovo to 9/11. Anna spends her time between Lanarkshire and Dingle in the west of Ireland, as well as in Spain to escape the British weather.