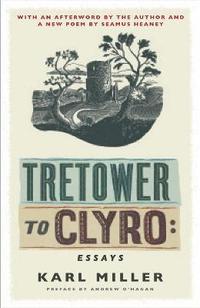 av Karl Miller
Häftad Engelska, 2013-02-27
249
Köp
Spara som favorit
Specialorder (osäker tillgång). Skickas inom 11-20 vardagar.
Fri frakt inom Sverige för privatpersoner.
Finns även som
Visa alla 1 format & utgåvor
In his latest book of essays Karl Miller turns his attention to appreciate certain writers of the English-speaking modern world. A new ruralism has come to notice in this country, and the book is drawn to country lives as they have figured in the literature of the last century. An introductory essay is centred on the Anglo-Welsh borderlands. Journeys taken with Seamus Heaney and Andrew O'Hagan to this countryside, and others, are threaded throughout the book. The poets Seamus Heaney and Ted Hughes are discussed, together with the fiction of Ian McEwan, the Canadian writer Alistair Macleod, the Irish writer John McGahern and the Baltimorean Anne Tyler. Scotland is a preoccupation of the later pieces, including the letters of Henry Cockburn, a lifelong interest of the author, who is also interested here in foxes and their current metropolitan profile.
Visa hela texten

'Wide-ranging, brilliantly erudite and eccentric' Margaret Drabble, Observer. * Observer * 'A new collection of essays by Karl Miller is a cause for jubilation' Independent. * Independent * 'Imbued with his usual eloquence and foresight ... his criticism attains an artistic quality of its own' Financial Times. * Financial Times *

Karl Miller was educated at the Royal High School of Edinburgh and Cambridge and Harvard Universities. He became literary editor of the Spectator and the New Statesman as well as editor of the Listener, and went on the found The London Review of Books, which he edited for many years. From 1974 to 1992 he served as Lord Northcliffe Professor of Modern English Literature at University College, London. His books include Cockburn's Millennium, which received the James Tait Black Memorial Award, Doubles, Authors, a Life of James Hoggart, Electric Shepherd and two volumes of autobiography, Rebecca's Vest and Dark Horses.