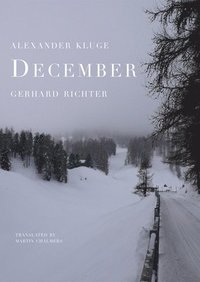 "Alexander Kluge and Gerhard Richter's December (translated by Martin Chalmers) revives a related tradition: the calendar as history, or the 'chronicle.' Kluge's texts--one for each day of the month--appear opposite images of winter wastescapes by Richter, together forming a stark, disconcerting record of a Germany frozen if not temporally then spiritually."--Joshua Cohen "Harper's" "December physically ferries the reader back and forth between word and image, prompting a search for equivalents, as well as for those lost elements that have no equivalents. The space that December inhabits--a winter at once ominous and intimate, the last breath of the year in anticipation of its end and rebirth--is not unlike the space of translation."--Madeleine LaRue "Quarterly Conversation"

Alexander Kluge is one of the major German fiction writers of the late-20th century and an important social critic. As a filmmaker, he is credited with the launch of the New German Cinema movement. Gerhard Richter is one of the most respected visual artists of Germany. His seminal works include Atlas (1964), October 18, 1977 (1988), and Eight Grey (2002). Martin Chalmers is a Berlin-based translator from Glasgow. He has translated some of the best-known German-language writers, including Herta M\u00fcller, Elfriede Jelinek and Hans Magnus Enzensberger.