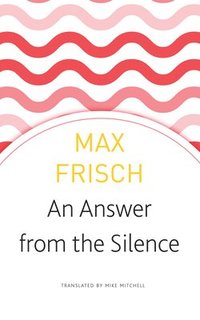 An Answer from the Silence

A Story from the Mountains

av Max Frisch
Häftad Engelska, 2019-10-25
129
Köp
Spara som favorit
Skickas inom 7-10 vardagar.
Fri frakt inom Sverige över 159 kr för privatpersoner.
Finns även som
Visa alla 1 format & utgåvor
This novel by esteemed Swiss writer Max Frisch is an exploration of the question: "Why don't we live when we know we're here just this one time, just one single, unrepeatable time in this unutterably magnificent world?!" This outcry against the emptiness of ordinary everyday life uttered by the hero of Frisch's book is countered by "an answer from the silence" he meets when face-to-face with death. When An Answer from the Silence begins, the protagonist has just turned thirty and is engaged to be married and about to start work as a teacher. Frightened by the idea of settling down, he journeys to the Alps in a do-or-die effort to climb the unclimbed North Ridge, and by doing so prove he is not ordinary. But having reached the top he returns not in triumph, but in frostbitten shock, having come dangerously close to death. This highly personal early novel reflects a crisis in Frisch's own life, and perhaps because of this intimate connection, he refused to allow it to be included in his Collected Works in the 1970s. Now available in English, this distinctive book will thrill fans of Frisch's other works.
Visa hela texten

Bloggat om An Answer from the Silence

Max Frisch (1911-91) was one of the giants of twentieth-century German literature, achieving fame as a novelist, playwright, diarist, and essayist. He lived primarily in Switzerland. He received many German and international literature prizes, including the Jerusalem Prize for the Freedom of the Individual in Society. Mike Mitchell has worked as a literary translator since 1995. He was awarded the 1998 Schlegel-Tieck Prize for his translation of Herbert Rosendorfer's Letters Back to Ancient China.