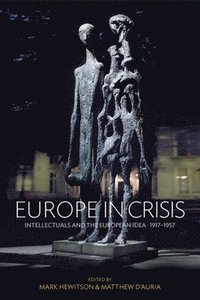 av Mark Hewitson, Matthew D'Auria
Inbunden Engelska, 2012-12-10
1379
Köp
Spara som favorit
Skickas inom 10-15 vardagar.
Fri frakt inom Sverige för privatpersoner.
Finns även som
Visa alla 2 format & utgåvor
The period between 1917 and 1957, starting with the birth of the USSR and the American intervention in the First World War and ending with the Treaty of Rome, is of the utmost importance for contextualizing and understanding the intellectual origins of the European Community. During this time of "crisis," many contemporaries, especially intellectuals, felt they faced a momentous decision which could bring about a radically different future. The understanding of what Europe was and what it should be was questioned in a profound way, forcing Europeans to react. The idea of a specifically European unity finally became, at least for some, a feasible project, not only to avoid another war but to avoid the destruction of the idea of European unity. This volume reassesses the relationship between ideas of Europe and the European project and reconsiders the impact of long and short-term political transformations on assumptions about the continent's scope, nature, role, and significance.
Visa hela texten

"The contributions are of a high standard - In almost all cases there was much that is new and interesting. There is more than enough substance, interest and range for this to be an effective contribution." * Peter Stirk, Durham University "[A]n excellent introduction to the history of the concept of 'Europe' that preceded the founding of the European Community in 1957. Spanning a wide range of authors and topics, it is essential reading for anyone interested in the intellectual history of European integration." * Egbert Klautke, University College London

Mark Hewitson is Senior Lecturer in German History and Politics and Chair of the Centre for European Studies at University College London. His publications include books on National Identity and Political Thought in Germany (OUP, 2000), Germany and the Causes of the First World War (Berg, 2004), Nationalism in Germany, 1848-1866 (Palgrave Macmillan, 2010) and What is a Nation? Europe, 1789-1914 (OUP, 2006, co-edited with Timothy Baycroft). Matthew D'Auria is completing his PhD in history at University College London, where he has taught European history, and social and political thought. He has published various studies of the relationship between nationalism and internationalism in the history of European political thought from the eighteenth to the mid-twentieth century. He is currently a Research Fellow at the University of Salerno.