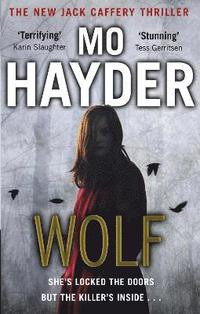 Hayder keeps you guessing adroitly - and has in Caffrey, a maverick cop so fascinatingly weird that he makes Ian Rankin's Rebus seems a stolid conformist * Sunday Times, Culture * Builds to its mesmerising climax with a brilliantly paced sense of menace. Masterful * Sunday Mirror *

MO HAYDER left school at fifteen. She worked as a barmaid, security guard, filmmaker, hostess in a Tokyo club, educational administrator and teacher of English as a foreign language in Asia. She had an MA in film from The American University in Washington DC and an MA in creative writing from Bath Spa University UK. Mo was the Sunday Times bestselling author of ten stunning crime novels, including the Jack Caffery series. Her fifth crime novel Ritual was nominated for the Barry Award for Best Crime 2009 and voted Best Book of 2008 by Publisher's Weekly. She won the CWA Dagger in the Library in 2011. Gone, her seventh novel, won the Edgar Allen Poe Award and her novel Wolf was nominated for Best Novel in the 2015 Edgar Awards, and is currently being adapted for the BBC. Set primarily in an alternate universe, her most recent novel, The Book of Sand, is the first in a series published posthumously under the author name THEO CLARE. Mo Hayder was diagnosed with motor neurone disease in December 2020 and passed away in July 2021. She leaves behind a husband and a daughter, a powerful legacy of books, and an incredible number of people who loved and admired her.