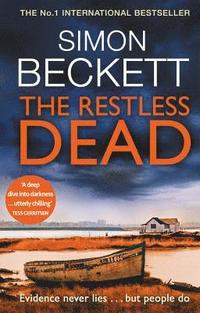 av Simon Beckett
Häftad Engelska, 2018-01-25
109
Köp
Spara som favorit
Skickas inom 7-10 vardagar.
Fri frakt inom Sverige över 159 kr för privatpersoner.
Beställ boken senast fredag 11 december kl. 12:45 för leverans innan julafton
Finns även som
Visa alla 1 format & utgåvor
'Atmospheric . . . a tense, gripping read' Sunday Times It's not the dead we need to fear. . . Top forensics expert Dr David Hunter is facing an uncertain future - his career hangs in the balance and his personal life has taken a turn for the worse. So when he gets a call from Essex police, it comes at the perfect time. A badly decomposed body has been found in the mudflats and salt marshes of the Backwaters. Could it be linked to two unsolved missing-person cases? But as these desolate wetlands begin to give up their grisly secrets, more remains are discovered. With its eerie, claustrophobic sense of place, authentic forensics and explosive, heart-in-mouth moments, The Restless Dead is a masterclass in crime fiction.
Visa hela texten

An utterly absorbing, atmospheric mystery that will keep you guessing to the very last page. It's no surprise that millions of readers devour Simon Beckett's books - he's a terrific writer. -- ANTONIA HODGSON, author of the award-winning The Devil in the Marshalsea Beckett is one of the country's best crime writers . . . His books are intelligent, beautifully written and utterly gripping. * SUNDAY EXPRESS * The forensics are chillingly authentic, the writing is both taut and beautifully atmospheric. -- ANN CLEEVES, bestselling author of the Vera Stanhope series Atmospheric . . . a tense, gripping read. * SUNDAY TIMES * A deep dive into darkness. Simon Beckett's masterful storytelling and macabre forensic details make his novels utterly chilling reads -- TESS GERRITSEN

Simon Beckett is the No.1 international bestselling author of the David Hunter series: The Chemistry of Death, Written in Bone, Whispers of the Dead, The Calling of the Grave, The Restless Dead and The Scent of Death. His books have been translated into 29 languages, appeared in the Sunday Times top 10 bestseller lists and sold over 10 million copies worldwide. A former freelance journalist, he has written for The Times, Daily Telegraph, Independent on Sunday and Observer. The inspiration for the first David Hunter novel came after a visit to the world-renowned Body Farm in Tennessee introduced him to the work of forensic anthropologists. Joint-winner (with Arne Dahl) of Europe's largest crime fiction prize - the Ripper Award 2018/19 - he has also won the Raymond Chandler Society's Marlowe Award and been short-listed for the CWA Gold Dagger, CWA Dagger in the Library and Theakston's Crime Novel of the Year awards. He is also the author of several stand-alone novels including Stone Bruises and Where There's Smoke. Simon Beckett lives in Sheffield.