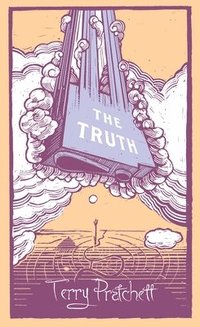 av Terry Pratchett
Inbunden Engelska, 2016-10-20
153
Köp
Spara som favorit
Finns även som
Visa alla 2 format & utgåvor
A beautiful hardback edition of the classic Discworld novel William de Worde is the accidental editor of the Discworld's first newspaper. New printing technology means that words just won't obediently stay nailed down like usual. There's a very real threat of news getting out there. Now he must cope with the traditional perils of a journalist's life - people who want him dead, a recovering vampire with a suicidal fascination for flash photography, some more people who want him dead in a different way and, worst of all, the man who keeps begging him to publish pictures of his humorously shaped potatoes. William just wants to get at THE TRUTH. Unfortunately, everyone else wants to get at William. And it's only the third edition...
Visa hela texten

"Other writers are mining the rich seam of comic fantasy that Pratchett first unearthed, but what keeps Pratchett on top is - quite literally - the way he tells them." - The Times "The Truth is an unmitigated delight and very, very funny...The pace is compelling but he never lets his tale descend into simple farce." - The Times "[Discworld] has the energy of The Hitchhiker's Guide to the Galaxy and the inventiveness of Alice in Wonderland...[Terry Pratchett] has an intelligent wit and a truly original grim and comic grasp of the nature of things." - A.S. Byatt, Sunday Times