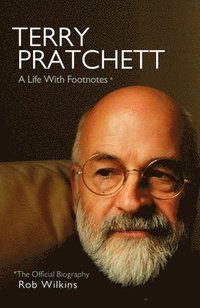 Terry Pratchett: A Life With Footnotes

av Rob Wilkins
Inbunden Engelska, 2022-09-29
258
Köp
Spara som favorit
Finns även som
Visa alla 4 format & utgåvor
'Always readable, illuminating and honest. It made me miss the real Terry.' - NEIL GAIMAN 'Sometimes joyfully, sometimes painfully, intimate . . . it is wonderful to have this closeup picture of the writer's working life.' - FRANK COTTRELL-BOYCE, OBSERVER 'Spins magic from mundanity in precisely the way Pratchett himself did.' - THE TELEGRAPH 'As frank, funny and unsentimental as anything its subject might have produced himself.' - MAIL ON SUNDAY -------- At the time of his death in 2015, award-winning and bestselling author Sir Terry Pratchett was working on his finest story yet - his own. The creator of the phenomenally bestselling Discworld series, Terry Pratchett was known and loved around the world for his hugely popular books, his smart satirical humour and the humanity of his campaign work. But that's only part of the picture. Before his untimely death, Terry was writing a memoir: the story of a boy who aged six was told by his teacher that he would never amount to anything and spent the rest of his life proving him wrong. For Terry lived a life full of astonishing achievements: becoming one of the UK's bestselling and most beloved writers, winning the prestigious Carnegie Medal and being awarded a knighthood. Now, the book Terry sadly couldn't finish has been written by Rob Wilkins, his former assistant, friend and now head of the Pratchett literary estate. Drawing on his own extensive memories, along with those of the author's family, friends and colleagues, Rob unveils the full picture of Terry's life - from childhood to his astonishing writing career, and how he met and coped with what he called the 'Embuggerance' of Alzheimer's disease. A deeply moving and personal portrait of the extraordinary life of Sir Terry Pratchett, written with unparalleled insight and filled with funny anecdotes, this is the only official biography of one of our finest authors. 'Of all the dead authors in the world, Terry Pratchett is the most alive.' - JOHN LLOYD
Visa hela texten

Always readable, illuminating and honest. It made me miss the real Terry. * Neil Gaiman * Heart breaking and funny . . . sometimes joyfully, sometimes painfully, intimate . . . it is wonderful to have this closeup picture of the writer's working life. -- Frank Cottrell-Boyce * Observer * The joy of this biography . . . is that it spins magic from mundanity in precisely the way Pratchett himself did. * The Telegraph * No one, after Pratchett's wife, Lyn, and daughter, Rhianna, knew the author as well as Wilkins. I wept through the last 20 pages - beautifully done - charting Pratchett's decline in a way that is both sensitive and unsparing. * The Times * Fond, funny and conveys a pitch-perfect sense of how Pratchett managed to take the elements of his 1950s working-class childhood . . . and turn it into a universe of limitless richness and invention. * Mail on Sunday * The friendship and affection between the pair shines through every page . . . Of course, [Pratchett] fans will love the book . . . and even casual readers will delight in tales of his idiosyncratic passions. * Independent * A biography almost as funny and perceptive as one of Terry's novels . . . a rich, deeply affectionate portrait of a unique personality . . . it's a joy to see the much-missed author spring back into technicolour life in this fascinating and deeply moving tribute. * Daily Express * A moving and acutely observed account . . . Pratchett's magical mind, and dementia, by the man who knew him best. * The Sunday Times * Wilkins has many advantages over most biographers, having not only known his subject well, but taken down notes while he was alive for his projected memoir. The result, at times, is like a ventriloquist act, with Pratchett's voice and personality emerging loud and clear. * The Herald * Both more and less than a biography . . . full of insights and revelations, in many ways the sort of thing Prathett might have written about himself, proud of what has been done, honest about the process . . . written with intelligence and compassion. -- Christopher Priest * The Times Literary Supplement * Reduced me to tears of both laughter and heartbreak. -- Charlotte Heathcote * Daily Mirror * Lively and affectionate, this is not a critical biography, but nor is it sycophantic. It shows Pratchett as brilliant and generous, but also cantakerous, with a ruthless sense of the ridiculous. * i News * A fabulous addition to any Pratchett library. * SFX * It isn't surprising that what most recommends this book is the anecdotes, amusing or sombre or often a mix of the two . . . It captures the spirit of Pratchett's writing by telling hard truths through an enjoyable-to-read layer and inspires rage, laughter and sadness in turns. * The Sydney Morning Herald * A captivating and in-depth account . . . [the] use of first-hand source material is very effective in relaying Pratchett's own take on many aspects of his life and career and, with Wilkins' additions and occasional fact-checking, it makes for a highly readable and enjoyable biography. * The AU Review * Wilkins is a faithful and comprehensive documenter of Pratchett's life . . . moving and sensitive. * Canberra Times *

Rob Wilkins worked with Terry Pratchett for more than twenty years, first as his personal assistant and later as his business manager. He now manages the Pratchett literary estate and Terry's production company, Narrativia.