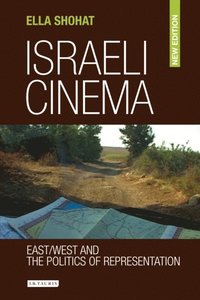 East/West and the Politics of Representation

av Shohat Ella Shohat
E-bok (PDF - DRM), Engelska, 2010-07-30
239
Ladda ned
Spara som favorit
Laddas ned direkt
Läs i vår app för iPhone, iPad och Android
Finns även som
Visa alla 2 format & utgåvor
A groundbreaking book, Israeli Cinema has shaped new paradigms for critical discussion of 'national cinema' and the Zionist masternarrative. Published first in English in 1989, the book provoked a stormy public debate upon its translation into Hebrew. This classic workis here republished with an extensive postscript chapter that reflects on the book's initial reception, while also pointing to some exciting new trends in the cinematic representation of Israel and Palestine, all addressed in relation to shifting intellectual currents, such as diasporic and postcolonial theory.Israeli Cinema explores the cinema as a productive site of national culture, dating back to the early Zionist films about turn-of-the-century Palestine. The text offers a decon-structionist reading of Zionism - a movement emerging simultaneously with the inventionof cinema - viewing the cinema as itself participating in the 'invention' of the nation. Unthinking the Eurocentric imaginary of 'East versus West', Ella Shohat highlights the paradoxes of an anomalous national/colonial project through a number of salient issues: the ambivalence toward the geographies of both 'East' and 'West'; the Sabra figure as a negation of the 'Diaspora Jew'; the iconography of the land of Israel as a denial of Palestine; the narrative role of 'the good Arab' and the limits of 'positive image' analysis; and the oxymoronic place allotted to Arab-Jews/Mizrahim within an orientalist historical and social discourse. The new postscript examines the emergence of richly multiperspectivalcultural practices that transcend earlier dichotomies through a palimpsestic and cross-border approach to Israel/Palestine. It looks at the inscription of the Arab-Jewish memory of Muslim spaces, while also reflecting on the Palestinian narration of the Nakba within a revisionist cinema that actively constructs an audio-visual archive. Shohat transnationalizes the discussion of 'national culture' not only by including Palestinian films produced within Israel but also by addressing diasporic films that treat the contested geography of Israel/Palestine.
Visa hela texten