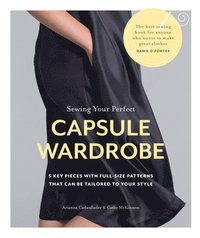 5 key pieces to tailor to your style

av Arianna Cadwallader, Cathy McKinnon
Häftad Engelska, 2017-10-05
201
Bevaka
Spara som favorit
Tillfälligt slut – klicka "Bevaka" för att få ett mejl så fort boken går att köpa igen.
A capsule wardrobe is timeless, stylish and effortlessly chic. Composed of go-to pieces that can be dressed up or down, it is the perfect antidote to the overstuffed drawers and ill-fitting cheap outfits that are the result of years of fast fashion on the high street. In this practical but inspiring book, seamstress Arianna Cadwallader and designer Cathy McKinnon present sewing patterns and instructions for the five key pieces that will form the basis of your own capsule wardrobe: * a great shift dress * well-fitting trousers * a simple yet stylish skirt * a light blouse * a jersey vest Their focus is on quality and fit - all the patterns can be adapted to fit and suit you perfectly, whether you prefer long, short or cap sleeves, high or low waistbands, and slim, straight or wide legged trousers. Once you've created your items you can then mix and match them to create a variety of looks and styles. Aimed at advanced beginners, the book guides you through how to measure yourself and all the techniques you will need. With a foreword by TV star Dawn O'Porter, this is the essential guide to creating your perfect wardrobe.
Visa hela texten

Arianna Cadwallader runs sewing school Saturday Sewing Sessions in Chelsea. She has a degree in Costume Interpretation and has previously worked on costumes for films including the Harry Potter series. She appeared on Channel 4's This Old Thing and now works with Dawn O'Porter on her BOB clothing line. Cathy McKinnon is the designer who founded Cloth magazine. She is now the art director for Simple Things magazine.