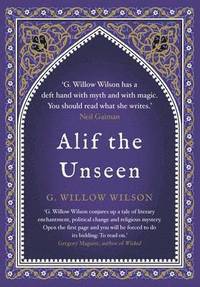 av G Willow Wilson
Inbunden Engelska, 2012-09-01
149
Bevaka
Spara som favorit
Bokens leverantör håller tillfälligt stängt på grund av Coronapandemin. Klicka "Bevaka" för att få ett mejl när boken går att beställa igen eller välj ett annat format nedan.
Finns även som
Visa alla 3 format & utgåvor
'I will tell you a story, but it comes with a warning; when you hear it, you will become someone else.' He calls himself Alif - few people know his real name - a young man born in a Middle Eastern city that straddles the ancient and modern worlds. When Alif meets the aristocratic Intisar, he believes he has found love. But their relationship has no future - Intisar is promised to another man and her family's honour must be satisfied. As a remembrance, Intisar sends the heartbroken Alif a mysterious book. Entitled The Thousand and One Days, Alif discovers that this parting gift is a door to another world - a world from a very different time, when old magic was in the ascendant and the djinn walked amongst us. With the book in his hands, Alif finds himself drawing attention - far too much attention - from both men and djinn. Thus begins an adventure that takes him through the crumbling streets of a once-beautiful city, to uncover the long-forgotten mysteries of the Unseen. Alif is about to become a fugitive in both the corporeal and incorporeal worlds. And he is about to unleash a destructive power that will change everything and everyone - starting with Alif himself.
Visa hela texten

Alif the Unseen is a terrific metaphysical thriller, impossible to put down... A multicultural Harry Potter for the digital age. * Hooman Majd, author of The Ayatollahs' Democracy and The Ayatollah Begs to Differ * G. Willow Wilson conjures up a tale of literary enchantment, political change, and religious mystery. Open the first page and you will be forced to do its bidding: To read on. * Gregory Maguire, author of Wicked * Marvelous... Intoxicating... Hugely entertaining. Wilson has a Dickensian gift for summoning a city and peopling it with memorable characters... True and scary... It doesn't take magical powers to predict it will be one of the year's best-loved books. * Washington Post * Wilson works magic... An exuberant fable that has thrills, chills and - even more remarkably - universal appeal * New York Times * A Harry Potter-ish action-adventure romance [that] unfolds against the backdrop of the Arab Spring... Improbably charming... A bookload of wizardry and glee. * New York Times * G. Willow Wilson has a deft hand with myth and with magic, and the kind of smart, honest writing mind that knits together and bridges cultures and people. You should read what she writes. * Neil Gaiman * Wilson writes beautifully, tells a great story, and even makes computer hackery seem like magic. -- Alison Flood * Sunday Times * Charming and original * Sunday Telegraph * Brilliant... witty, imaginative and unorthodox in all senses * Observer * An exhilarating techno-thriller but also far more than that... Wilson has created in this rich, literate novel a profound dialogue between tradition and modernity, belief and non-belief, fairy tale and urban reality. * Guardian *

G. Willow Wilson was born in New Jersey in 1982. After graduating with a degree in History and coursework in Arabic language and literature, she moved to Cairo, where she became a contributor to the Egyptian opposition weekly Cairo Magazine until it closed in 2005. She has written for politics and culture blogs across the political spectrum, and has previously written a graphic novel, Cairo, illustrated by M. K. Perker, and a series of comics based on her own experiences, for D.C. Comics.