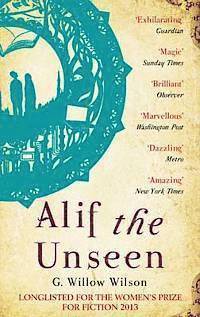 av G Willow Wilson
Häftad Engelska, 2003-07-01
119
Köp
Spara som favorit
Skickas inom 7-10 vardagar.
Fri frakt inom Sverige över 159 kr för privatpersoner.
'I will tell you a story, but it comes with a warning; when you hear it, you will become someone else.' He calls himself Alif, a young man born in a Middle Eastern city that straddles the ancient and modern. When Alif comes into possession of a mysterious book entitled The Thousand and One Days, he discovers a door to another world - a world from a very different time, when old magic was in the ascendant and the djinn walked amongst us. Thus begins an adventure that takes him through the crumbling streets of a once-beautiful city, to uncover the long-forgotten mysteries of the Unseen. Alif is about to become a fugitive. And he is about to unleash a destructive power that will change everything and everyone - starting with Alif himself...
Visa hela texten

Marvelous... Intoxicating... Hugely entertaining... It doesn't take magical powers to predict it will be one of the year's best-loved books. * Washington Post * A Harry Potter-ish action-adventure romance [that] unfolds against the backdrop of the Arab Spring... Improbably charming... A bookload of wizardry and glee. * New York Times * Wilson writes beautifully, tells a great story, and even makes computer hackery seem like magic. * Sunday Times * Charming and original * Sunday Telegraph * Among the most original and challenging books of 2012, and my personal pick for at least one major award in 2013. * Guardian * Brilliant... witty, imaginative and unorthodox in all senses * Observer * An exhilarating techno-thriller but also far more than that... Wilson has created in this rich, literate novel a profound dialogue between tradition and modernity, belief and non-belief, fairy tale and urban reality. * Guardian *

G. Willow Wilson was born in New Jersey in 1982. After graduating with a degree in History and coursework in Arabic language and literature, she moved to Cairo, where she became a contributor to the Egyptian opposition weekly Cairo Magazine until it closed in 2005. She has written for politics and culture blogs across the political spectrum, and has previously written a graphic novel, Cairo, illustrated by M. K. Perker, and a series of comics based on her own experiences, for D.C. Comics.