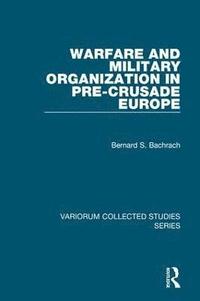 av Bernard S Bachrach
Inbunden Engelska, 2002-03-01
1619
Köp
Spara som favorit
Skickas inom 10-15 vardagar.
Fri frakt inom Sverige för privatpersoner.
Kan tyvärr inte längre levereras innan jul.
Throughout the history of Western civilization, war, preparation for war, and its aftermath have dominated the use of surplus human and material resources. Yet, despite our recent history, the brute facts of military history are too often ignored by those who have instead sought to provide a more ideal understanding of the Middle Ages in Europe. This predilection for chivalry at the expense of logistics and for "just war theory" at the expense of military technology have distorted both scholarly and popular understanding of the role played by military matters in the Middle Ages. The aim of the fourteen articles reprinted here is to help provide a more balanced view, offsetting notions of romanticism and an anthropologically inspired primitivism of a Dark Age in pre-Crusade Europe. Particular topics include: the survival of Classical influences into the early Middle Ages; the strategy of castle-building in the early Angevin domains; and William the Conqueror's preparations for the invasion of England.
Visa hela texten

Contents: Introduction; General Studies: The practical use of Vegetius' De Re Militari during the early Middle Ages; Caballus et caballarius in medieval warfare; Military technology and garrison organization: some observations on Anglo-Saxon military thinking in light of the Burghal Hidage; Medieval siege warfare: a reconnaissance; Logistics in pre-crusade Europe; Early medieval fortifications in the 'west' of France: a revised technical vocabulary; Fortifications and military tactics: Fulk Nerra's strongholds circa 1000; Angevin and Norman Warfare: Angevin campaign forces in the reign of Fulk Nerra, Count of the Angevins (987-1040); The combat sculptures at Fulk Nerra's 'Battle Abbey' (c.1005-12); The milites and the millennium; The Angevin strategy of castle-building in the reign of Fulk Nerra, 987-1040; The cost of castle-building: the case of the tower at Langeais, 992-4; On the origins of William the Conqueror's horse transports; Some observations on the military administration of the Norman Conquest; Index.