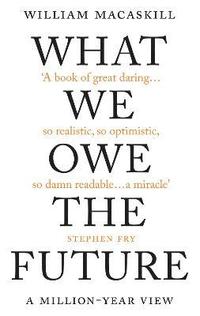 What We Owe The Future

av William Macaskill
Inbunden Engelska, 2022-09-01
242
Köp
Spara som favorit
Kan tyvärr inte levereras innan julafton.
Finns även som
Visa alla 2 format & utgåvor
THE SUNDAY TIMES BESTSELLER 'Unapologetically optimistic and bracingly realistic, this is the most inspiring book on 'ethical living' I've ever read.' Oliver Burkeman, Guardian 'A monumental event.' Rutger Bregman, author of Humankind 'A book of great daring, clarity, insight and imagination. To be simultaneously so realistic and so optimistic, and always so damn readable... well that is a miracle for which he should be greatly applauded.' Stephen Fry Humanity is in its infancy. Our future could last for millions of years - or it could end tomorrow. Astonishing numbers of people could lead lives of great happiness or unimaginable suffering, or never live at all, depending on what we choose to do today. As we approach a critical juncture in our history, we can make profound moral decisions about how humanity's course plays out. We can create positive change on behalf of future generations, to prevent the use of catastrophic weapons and maintain peace between the world's great powers. We can improve our moral values, navigating the rise of AI and climate change more fairly for generations to come. The challenges we face are enormous. But so is the influence we have. If we choose wisely, our distant descendants will look back on us fondly, knowing we did everything we could to give them a world that is beautiful and just.
Visa hela texten

"MacAskill's case for "longtermism" - "the idea that positively influencing the longterm future is a key moral priority of our time" - is overwhelmingly persuasive. But it's also unapologetically optimistic and bracingly realistic: this is by some distance the most inspiring book on "ethical living" I've ever read... a powerful argument in favour of freedom of speech and viewpoint diversity... The overall promise of this thrilling book is of a life both less burdened by ethical guilt.'" -- Guardian 'Remarkable... MacAskill's command of factual detail is admirable. So are his lightness of prose and facility in explaining tricky arguments... Is our world better off for containing William MacAskill?... I say yes... MacAskill is a worthy heir to Derek Parfit's philosophical legacy, adding deep factual research and accessible writing to a provocative line of thought.' -- TLS 'This book is a monumental event. William MacAskill is one of the most important philosophers alive today, and this is his magnum opus.' -- Rutger Bregman, author of <i>Humankind</i> 'No living philosopher has had a greater impact upon my ethics than Will MacAskill. And much of the good I now do is the direct result of his influence. In What We Owe The Future, MacAskill has transformed my thinking once again, by patiently dismantling the lazy intuitions that rendered me morally blind to the interests of future generations. This is an altogether thrilling and necessary book.' -- Sam Harris 'An optimistic look at the future that moved me to tears' -- Joseph Gordon-Levitt 'Many books promise a new "big idea", but few deliver one as brilliant as MacAskill's in What We Owe The Future. A fascinating, profound read.' -- Julia Galef 'What We Owe The Future brilliantly shows us the biggest picture of all and persuasively reminds us of the vast impact we can all have.' -- Tim Urban 'What We Owe The Future makes the case for thinking seriously about the very long term. It gives a profoundly new perspective on human civilization and our place in it.' -- Lydia Cacho 'There are moments when we can change outcomes easily, but if we don't bend those curves right then, we can lock in enormous longterm damage. This fascinating book makes us think relentlessly and usefully about such pivot points; few prods could be more important.' -- Bill McKibben 'Fascinating... a work of advocacy rather than philosophy and as such it is a good and useful read.' -- Sunday Times 'A social history of extraordinary scope, coupled with a haunting yet triumphant look to the future... a grand tour into tomorrow...' -- Tablet 'This book will change your sense of how grand the sweep of human history could be, where you fit into it, and how much you could do to change it for the better. It's as simple, and as ambitious, as that.' -- Ezra Klein 'The decisions we make this century are like no other; either we go extinct by our own hand, or we lay the path to the stars. What We Owe The Future is our guidebook to navigating this critical moment.' -- Liv Boeree 'A brilliant book that makes clear both how much is at stake when it comes to the long term, and the incredible opportunities we have to shape it. It has changed how I think about my time on earth.' -- Max Roser 'Riveting... there is nothing familiar or predictable about this book. It challenges readers to reorganise their whole conceptual schema. It is part technical philosophy, part science fiction and part rallying cry.' -- Prospect 'Should we care about people who don't yet exist - the billions who will live in the future? Or is it better to help people living now? This mind-bending, eon-hurtling, visionary, masterful book raises questions that are among the most crucial we face as a species. MacAskill makes a moral case for the future that is urgent, clear, and utterly convincing.' -- Larissa MacFarquhar, author of Strangers Drowning 'I expected William MacAskill to write a forceful a

William MacAskill is an Associate Professor of Philosophy at Oxford University. His academic work spans a breadth of fields within normative philosophy, including practical ethics, population ethics, social choice theory and decision theory. At age 28, he became the youngest tenured professor of philosophy in the world. MacAskill is the cofounder of Giving What We Can, 80,000 Hours, the Centre for Effective Altruism and the Oxford University-based Global Priorities Institute. He's recognised as a World Economic Forum Young Global Shaper and a Forbes 30 Under 30 Social Entrepreneur.