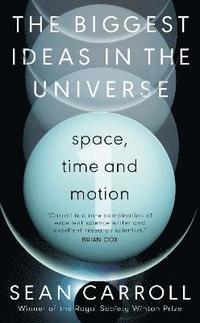 The Biggest Ideas in the Universe 1

av Sean Carroll
Inbunden Engelska, 2022-09-15
208
Köp
Spara som favorit
Kan levereras innan julafton!
Finns även som
Visa alla 1 format & utgåvor
Knowledge is power... A landmark new series from a prize-winning scientist and communicator In this major trilogy, Sean Carroll opens up the world of physics and shows that you don't necessarily need a science degree to gain a deeper insight into the workings of the universe. Starting with the ideas that revolutionised our view of nature, Space, Time and Motion poses deep questions about the cosmos, guiding us through classical physics from Euclid and Galileo to Newton and Einstein. Carroll investigates how a twin could be seven years older than her brother, and demonstrates why it's easier than you might think for a drifting astronaut to get back to the safety of the space station. These are the laws of physics as you've never understood them before.
Visa hela texten

'Neat, and extremely simple: only a deep thinker such as Sean Carroll could introduce the complexity of Einstein's general relativity in such a luminous and straightforward manner.' -- Carlo Rovelli, author of <i>Seven Brief Lessons on Physics</i> 'Sean Carroll has achieved something I thought impossible: a bridge between popular science and the mathematical universe of working physicists. Magnificent!' -- Brian Clegg, author of <i>Ten Days in Physics that Shook the World</i> 'Do popular books about physics leave you feeling that you're just getting stories and not real science? If so, this is the book for you. In a clear and non-scary way, it explains the mathematical theories behind what physicists really think. Carroll's trilogy will plug a big gap in how physics is communicated to non-specialists - and to judge from this first volume, will do so brilliantly.' -- Philip Ball, author of <i>Beyond Weird: Why Everything You Thought You Knew about Quantum Physics Is Different</i> 'As a ten-year-old physics enthusiast, I would have loved The Biggest Ideas in the Universe. With this book, Sean Carroll rejects traditional elitism in physics and welcomes in anyone who knows only a little algebra but wants to understand the whole universe.' -- Chanda Prescod-Weinstein, author of <i>The Disordered Cosmos: A Journey into Dark Matter, Spacetime, and Dreams Deferred</i> 'Sean Carroll is a wizard of empathy. In this short book, the first of three on The Biggest Ideas in the Universe, he anticipates what's always confused you about physics and then gently guides you to enlightenment... and ultimately, to newfound wonder.' -- Steven Strogatz, author of <i>The Joy of X</i> and <i>Infinite Powers</i> 'Sean Carroll has produced a guide to relativity theory for the 21st century, plugging the gap between "popularisations" that emphasise the oddities without giving the facts, and textbooks that train students to manipulate equations without providing insight into what it all means. He will open your eyes to the way physicists view the universe, making fundamental ideas accessible without the need for a degree in science, but bravely ignoring the old adage that adding equations will scare readers off. Don't be scared; this is the best lay-person's guide to the subject, written in an accessible, entertaining style and impeccably accurate. And the author promises to tackle quantum theory next! I can't wait.' -- John Gribbin, senior honorary research fellow in astronomy, University of Sussex 'No-nonsense, not-dumbed-down explanations of basic laws of the universe that reward close attention.' -- <i>Kirkus</i> 'Sean Carroll's greatest gift isn't that he's an expert on the fundamentals of physics, which he is, but that he never speaks down to his reader. He assumes that anyone, even the uninitiated, can learn to understand the formulae that underlie complicated concepts like space and time. It is a pleasure to read his work, a greater pleasure still to get a world-class education from such a witty, thoughtful teacher.' -- Annalee Newitz, author of <i>The Future of Another Timeline</i>

Sean Carroll is Homewood professor of natural philosophy at Johns Hopkins University. He won the Royal Society Winton Prize for his book on the search for the elusive Higgs boson, The Particle at the End of the Universe, and The Big Picture was an international bestseller. His most recent book is Something Deeply Hidden. He lives in Baltimore, Maryland. @seanmcarroll preposterousuniverse.com