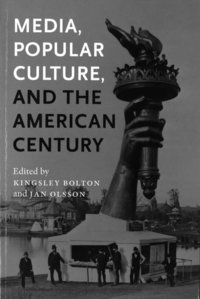 av Kingsley Bolton, Jan Olsson
Häftad Engelska, 2011-01-13
312
Köp
Spara som favorit
In 1941, media mogul Henry R. Luce exulted, "American jazz, Hollywood movies, American slang, American machines and patented products are infact the only things that every community in the world, from Zanzibar to Hamburg, recognizes in common." It is as true today as it was then. From the early daysof Hollywood, an insatiable demand for U.S. cultural products -- in advertising, fashion, film, popular music, television, and much else -- has had a profound andcontinuing impact across the globe. Media, Popular Culture, and the American Centuryexplores a diverse range of Americana, where the borders between the real and theimaginary, dream and dystopia, America and the world, blur and disappear. Essaysmove from configurations of U.S. culture in the early 1900s to the age of Google anddigital music.
Visa hela texten