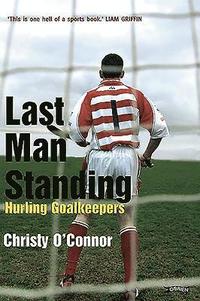 av Christy O'Connor
Häftad Engelska, 2005-08-01
229
Köp
Spara som favorit
Skickas inom 10-15 vardagar.
Fri frakt inom Sverige för privatpersoner.
Finns även som
Visa alla 1 format & utgåvor
'Goalkeepers walk a tightrope between triumph and disaster...' The hurling goalkeeper must surely occupy the most precarious position on the pitch -- glorified as a saviour if their team succeeds and damned if they fail. For this book Christy O'Connor has had unique and continuous access to twelve goalkeepers over one season and tracked their experiences through the highs and lows, the celebrations and rejections, the saves and the misses, resulting in an inside story never told before. The players talk frankly about the pressures, the passion, the trauma, the disappointments and glories, the utter despair at being dropped from the team and the long road back to re-selection. The brotherhood of goalies forms a kind of inner club within the hurling community -- here we are taken into its heart and spirit as never before. Includes: Donal Og Cusack (Cork); James McGarry (Kilkenny); Liam O'Donoghue (Galway); Brendan Cummins (Tipperary); Stevie Brenner (Waterford); Brian Mullins (Offaly); Timmy Houlihan (Limerick); Brendan McLoughlin (Dublin); Davy Fitzgerald (Clare); Graham Clarke (Down); DD Quinn (Antrim); Damien Fitzhenry (Wexford), as well as a wealth of stories and anecdotes about famous past teams and players.
Visa hela texten

'an extroardinary portrait of a specialist position. Not everyone can be a keeper. Not everyone could have written a book of this power.' -- Michael Foley, The Sunday Times 'Sportspeople talk about listening to Al Pacino's 'inch by inch' speech before big games or watching some emotionally charged film like 'Braveheart' to motivate themselves for challenges ahead. Those, though are short term fixes. Christy O'Connor's 'Last Man Standing' will fuel you for life. An inspiring read.'' -- Stephen Glennon - Connaught Tribune 'unquestionably a classic, and among the finest GAA books ever published. The standard of writing is exceptionally high while the respect in which O'Connor is held amongst the leading goalkeepers in the country is clearly evident as men like Davy Fitzgerald, Donal Og Cusack, Damien Fitzhenry and Stevie Brenner bear their souls to the author. A truly outstanding book and a must for any sports fan this Christmas.' -- James Laffey - Western people 'While it's usually wise to tread warily at the sight of journalists heaping praise on a book written by another journalist, no such caution is needed in relation to Last Man Standing, a fine idea splendidly executed by O'Connor. It might just be the Irish sports book of the year.' -- The Sunday Tribune * The Sunday Tribune * 'As good as it gets in the GAA genre' -- Munster Express * The Munster Express * 'One of the best GAA publications ever released. A perfect book for GAA fans.' -- Damian Lawlor - Irish Daily Star 'features a series of brutally honest interviews with several of the best hurling goalkeepers in the game, and should be made mandatory reading for every GAA fan in the country. Not just because of its style and content, both of which are top-class, but because of what it reveals' -- Irish Examiner * The Irish Examiner * 'Pick up Christy O'Connor's book Last Man Standing. You won't regret it.' -- Irish Examiner * The Irish Examiner * 'It doesn't come as a huge surprise to learn that [Sean Og O hAilpin] is close to Donal Og Cusack, a highly-motivated figure like himself. Insights in to Cusack's obsessive nature are contained in Christy O'Connor's excellent book, Last Man Standing, revealing long and lonely hours spent preparing for the hurling season.' -- Dermot Crowe - Sunday Independent * The Sunday Independent * 'There is a theme of tenuousness which runs through Christy O'Connor's wonderful new book on the lonely art of being a hurling goalkeeper. Last Man Standing could only have been written by a goalkeeper, a younger brother and a fine writer' -- Tom Humphries - The Irish Times * The Irish Times * 'O'Connor offers the reader unrivalled insight into the lives of people such as Fitzgerald, Donal Og Cusack, Damien Fitzhenry and James McGarry. Carries some fascinating accounts about what it takes to become the best in your field and what it's like to win and lose in the Championship.' -- Irish News * Irish News *

CHRISTY O'CONNOR is a freelance journalist based in Ennis, Co. Clare. He formerly worked as sports correspondent in the Dublin newspaper industry. He is also a goalkeeper who played in two All-Ireland club hurling finals and he was a member of the Clare senior hurling panel for four years.