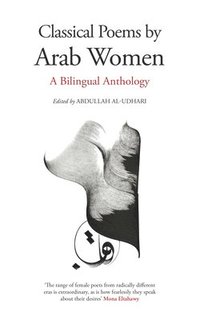 av Abdullah Al-Udhari
Häftad Arabiska, 2001-02-01
132
Köp
Spara som favorit
Arab women poets have been around since the earliest of times, yet their diwans (collected poems) were not given the same consideration as their male counterparts'. Spanning 5,000 years, from the pre-Islamic to the Andalusian periods, Classical Poems by Arab Women presents rarely seen work by over fifty women writers for the first time. From the sorrowful eulogies of Khansa to the gleeful scorn of Wallada bint al-Mustakfi, this collection exclusively features the work of Arab women who boldly refused to be silenced. The poems are excursions into their vibrant world whose humanity has been suppressed for centuries by religious and political bigotry. With poems in both English and Arabic, this remarkable anthology celebrates feminine wit and desire, and shows the significant contribution Arab women made to the literary tradition.
Visa hela texten

'The range of female poets from radically different eras is extraordinary, as is how fearlessly they speak about their desires' Mona Eltahawy'; 'A unique anthology that transcends love and liberation' Moris Farhi; 'Al-Udhari's effort to clarify this subject really does fill a gap and contributes to a more balanced discussion that the works about women in the modern Arab world allow.' Folklore Bulletin, Ohio State University 'The very process of anthologizing the names of so many unfamiliar poets has provided a useful historical survey.' Roger Allen, MESA Bulletin 'An outspoken and controversial book that provides many moments for both enjoyment and reflection.' Denys Johnston-Davies, Al-Ahram 'One of the most exciting books to have come my way this year ... Vividly conveys the richness and diversity of a culture more closely related to our own than we realize.' Prospect

Abdullah al-Udhari was born in Taiz, Yemen, in 1941, and has lived in London since 1962. He studied classical Arab literature and Sabaean epigraphy at London University, where he also received a doctorate for his pioneering study, Jahili Poetry before Imru al-Qais [4000 bce500 ce], which established him as an authority on early Jahili literature. In 1974 he founded and edited TR, an Anglo-Arab literary and arts magazine. He is a literary historian, poet and storyteller, and the author of Voice Without Passport, The Arab Creation Myth, Victims of a Map, and Modern Poetry of the Arab World.