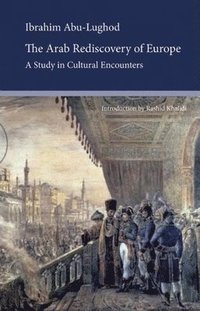 The Arab Rediscovery of Europe

A Study in Cultural Encounters

av Ibrahim Abu Lughod
Häftad Engelska, 2011-02-04
169
Köp
Spara som favorit
Skickas inom 7-10 vardagar.
Fri frakt inom Sverige för privatpersoner.
Napoleon's invasion of Egypt in 1798 suddenly exposed the Arab provinces of the Ottoman Empire to a Europe vastly different from the one known to the Arabs of the Middle Ages. At the start of the nineteenth century, Arabs were totally unprepared for the social, economic, and political progress made in Europe. By 1870, however, their vague notions had evolved into a fairly sophisticated knowledge of the historic background and contemporary achievements of various European nations, and the new reform movements in Egypt and the Fertile Crescent had incorporated into their programs the ideological premises and political institutions of European liberalism. Ibrahim Abu-Lughod's pioneering work traces the role of the Arab intelligentsia in increasing Arab awareness of Europe and in shaping visions of Arab political futures. First published in 1963, it was hugely influential in instigating a detailed study of the Arab-European encounter in the nineteenth century using Arabic sources.
Visa hela texten

'Palestine's foremost academic and intellectual' Edward Said, Guardian 'One of the first Arab-American scholars to have a really serious effect on the way the Middle East is portrayed in political science and in America.' Rashid Khalidi, Columbia University 'A significant contribution to the study of Arab adjustment to the modern age. Abu-Lughod has combined insight and careful interpretation with thorough scholarship.' C. F. Dawn, University of Illinois

Ibrahim Abu-Lughod (1929-2001) was an American-Palestinian academic, writer and editor. He taught at Smith College, Massachusetts, McGill University, Montreal, and then spent 34 years at Northwestern University, Illinois, where he founded the Institute of African Studies. He founded the Association of Arab-American University Graduates in 1968 and the journal Arab Studies Quarterly in 1978, and held two UNESCO posts. He later became a professor and vice-president of Bir Zeit University in the West Bank. Introduction by Rashid Khalidi: Rashid Khalidi is the Edward Said Professor of Modern Arab Studies at Columbia University. He is the director of the Middle East Institute of Columbia's School of International and Public Affairs. His publications include The Iron Cage: The Story of the Palestinian Struggle for Statehood (2007).