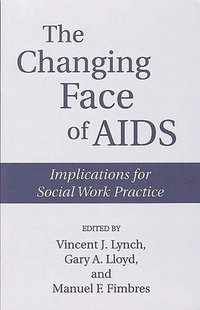 The Changing Face of AIDS

av Manuel Fimbres, Gary Lloyd, Vincent Lynch
Häftad Engelska, 1995-04-01
399
Köp
Spara som favorit
Skickas inom 5-8 vardagar.
Fri frakt inom Sverige för privatpersoner.
Finns även som
Visa alla 1 format & utgåvor
This edited collection discusses the current demographic patterns and notes the rapid and startling spread of AIDS/HIV to new populations-including women, adolescents, the mentally ill, substance abusers, and minorities. In a practical manner, each contributor establishes guidelines for need definition, effective service delivery, and case practice among different population segments. This is a valuable book providing experienced-based direction and hope because of its agenda for AIDS/HIV education and action among those in social work practice. Social work practitioners active among those most directly involved with persons with AIDS/HIV need guidance and support. This volume offers both in a balanced analysis of key issues relating to their practice. The authors clearly and authoritatively establish that the demographics of the AIDS/HIV crisis are undergoing change rapidly and alarmingly. Although there have been significant advances in education about AIDS and modifications in sexual practices among gay men resulting in a lowered rate of new infection, other groups are shown to be evidencing explosive levels of infection. Not only are the population parameters of AIDS defined, but the fundamental issues of social service delivery are addressed as are the special needs of the newly at-risk groups. Women, adolescents, substance abusers, minorities, and the mentally ill are all in the demographic patterns describing AIDS/HIV diffusion. The most compelling AIDS care issues are directly focused on and practical guidance is given to social work practitioners. AIDS/HIV poses a sometimes daunting challenge threatening to overwhelm service providers. This book will be of value due to its sensitive, insightful, experience-based guidance at the level of practice. It will also prove a useful resource for all in the caring professions who will appreciate its timely explanation of the complexities involved in framing effective responses to current and emerging needs associated with AIDS/HIV.
Visa hela texten