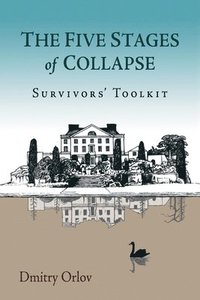 The Five Stages of Collapse

av Dmitry Orlov
(1 röst)
Häftad Engelska, 2013-06-20
199
Köp
Spara som favorit
Skickas inom 7-10 vardagar.
Fri frakt inom Sverige för privatpersoner.
Finns även som
Visa alla 1 format & utgåvor
In the face of political impotence, resource depletion, and catastrophic climate change, many of us have become reconciled to an uncertain future. However, popular perception of how this future might actually unfold varies wildly from "a severe and prolonged recession," to James Howard Kunstler's "long emergency," to the complete breakdown of civilization. In The Five Stages of Collapse, Dmitry Orlov posits a taxonomy of collapse, offering a surprisingly optimistic perspective on surviving the sweeping changes of the day with health and sanity intact. Arguing that it is during periods of disruption and extreme uncertainty that broad cultural change becomes possible, Orlov steers the reader through the challenges of financial, commercial, and political collapse. He suggests that if the first three stages are met with the appropriate responses, further breakdown may be arrested before the extremes of social and cultural collapse are reached. Drawing on a detailed examination of post-collapse societies, including the Somali people of Africa, the Pashtuns of Afghanistan, the Roma of Central and Eastern Europe, and even the Russian mafia, The Five Stages of Collapse describes successful adaptations in areas such as finance, self-governance, and social and cultural organization. These fascinating case studies provide a unique perspective on the characteristics that determine highly resilient communities. Shot through with Orlov's trademark dark humor, this is an invaluable toolkit for creating workable post-collapse solutions. Dmitry Orlov was born in Leningrad, Russia, and immigrated to the United States. He is the author of Reinventing Collapse and maintains the phenomenally popular blog Club Orlov.
Visa hela texten

Review, Charlie Smith, Straight.com July 1, 2013 Five Stages of Collapse is a highly entertaining and enlightening examination of the entrails of what happens when societies are driven into the abyss by greedy, hard-hearted elites and corrupt and incompetent politicians. And if Orlov turns out to be correct, this book just might end up saving your life by revealing steps you can take to prepare for the worst. Review, Carolyn Baker, Speaking Truth to Power April 7,2013 I am a huge fan of Dmitry's work, and I must concur with Richard Heinberg who says, "Even if I believed collapse were impossible I'd still read everything Dmitry Orlov writes: he's that entertaining." Incisive articulation of reality tempered with irrepressible humor and sarcasm define his writing style and not only compel us to stay with what some describe as a "dark Russian perspective," but reveal a man who has found a way to live with what is so and navigate it with buoyant humanity. The Five Stages of Collapse is nothing less than a definitive textbook for a hypothetical course entitled "The Collapse Of Industrial Civilization 101" or perhaps a bible of sorts for an imaginary "Institute of Collapse Studies." While to my knowledge no such courses or organizations presently exist, this book would be an essential aspect of any such entity's credibility. Review, Michael C. Ruppert, April 18, 2013 The writing of this book was a rotten job, but it was absolutely necessary. If someone had to do it, I am very glad that it was Dmitry Orlov. Without his wit, alacrity and experience, the task of beating the horse of the Cartesian approach to understanding our dying world to death would have resulted in something unbearably maddening, dry and uninspiring. In this book he sneaks some LOLROF side-splitters in when you least expect them. One gathers from Orlov's painstaking efforts, the futility of looking to outdated constructs and philosophies for understanding and relief from a crisis that demands complete innovation and inspiration. Reading closely, one sees Orlov carefully planting seeds of reconciliation with our planet and each other throughout--as a fundamental baseline. He arrives at places outside the box of the current meme by using methodologies and analyses that are sacramental within the meme. That's an achievement. Perhaps in his next book he will stand on that ground more forcefully and tell us what he sees. We don't need to understand collapse right now as much as we need to survive it. And that is where Dmitry Orlov rises through the rubble and gives us magnificent gems like this: "At the rock bottom of human survival, there is no individual and there is no state; there is only the family, or, if there isn't, there is something that's not quite human--or there is nothing at all." Profound insight combined with wry humor is such an incendiary weapon I am tempted to call The Five Stages of Collapse an "Orlov Cocktail." His delivery of hard truths laced with irony saturates us in seldom reported but extremely relevant facts about the world. He is one of the best writers on the scene today, working at the top of his game. There is more to enjoy in this book with every page you turn, and in very uncertain times, Orlov's advice is, at its core, kind-spirited and extraordinarily helpful. ---Albert Bates, author, The Biochar Solution Even if I believed collapse were impossible I'd still read everything Dmitry Orlov writes: he's that entertaining. Unfortunately, however, collapse of some sort or other, of some degree or another, is almost guaranteed. Orlov does us all a great service by teasing apart the kinds and degrees of collapse so that we can prepare for what is likely and "dig in our heels" to prevent what is unsurvivable. ---Richard Heinberg, Senior Fellow, Post Carbon Institute, Author, The End of Growth

Dmitry Orlov is a Russian-American engineer and writer who was born in Leningrad and immigrated to the United States at the age of 12. He was an eyewitness to the collapse of the Soviet Union over several extended visits to his Russian homeland between the late eighties and mid-nineties. Orlov lives off the grid, sailing his boat up and down the Eastern Seaboard and commuting by bicycle. He believes that, given appropriate technology, we can greatly reduce personal resource consumption while remaining perfectly civilized. He is the author of Reinventing Collapse and blogs regularly at Club Orlov (www.cluborlov.com).

Introduction: Collapses in General What is collapse? When will collapse occur? What are the stages of collapse? 1. Financial Collapse The root of the problem The wrong math Defaults big and small The end of money Options for cashing out Alternatives to money How we did it Chits, specie and stock-in-trade A likely endgame Cold-starting instructions Beware financial despotism Monetary mysticism The untrustworthy and the trustful Goetterdammerung Case Study: Iceland 2. Commercial Collapse Cascaded failure Liar word: efficiency Life upside down The many advantages of gift Money corrupts Opportunities for gift-giving Meanwhile in Soviet Russia The new normal A cultural flip Case Study: The Russian Mafia 3. Political Collapse Anarchy's charms The nation-state fades out National language Taking care of your own State religion Life after the nation-state The problem of excessive scale The proliferation of defunct states Government services disappear Denationalization of currency What governments are good at Warfare becomes self-defeating The end of law and order The end of the welfare state Virtualized politics Case Study: The Pashtuns 4. Social Collapse The limits of community planning The new rules Social reclamation Religion as organizing principle Charitable giving and taking What society? Case Study: The Roma 5. Cultural Collapse Humans and other animals The limits of language Spoken memory The isolated human The primacy of family Case Study: The Ik Afterword Endnotes Bibliography Index About the Author