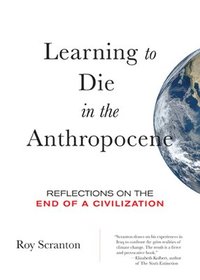 Learning to Die in the Anthropocene

Reflections on the End of a Civilization

av Roy Scranton
Häftad Engelska, 2015-10-22
126
Köp
Spara som favorit
Finns även som
Visa alla 1 format & utgåvor
"In Learning to Die in the Anthropocene, Roy Scranton draws on his experiences in Iraq to confront the grim realities of climate change. The result is a fierce and provocative book."--Elizabeth Kolbert, Pulitzer Prize-winning author of The Sixth Extinction: An Unnatural History "Roy Scranton's Learning to Die in the Anthropocene presents, without extraneous bullshit, what we must do to survive on Earth. It's a powerful, useful, and ultimately hopeful book that more than any other I've read has the ability to change people's minds and create change. For me, it crystallizes and expresses what I've been thinking about and trying to get a grasp on. The economical way it does so, with such clarity, sets the book apart from most others on the subject."--Jeff VanderMeer, author of the Southern Reach trilogy "Roy Scranton lucidly articulates the depth of the climate crisis with an honesty that is all too rare, then calls for a reimagined humanism that will help us meet our stormy future with as much decency as we can muster. While I don't share his conclusions about the potential for social movements to drive ambitious mitigation, this is a wise and important challenge from an elegant writer and original thinker. A critical intervention."--Naomi Klein, author of This Changes Everything: Capitalism vs. the Climate "Concise, elegant, erudite, heartfelt & wise."--Amitav Ghosh, author of Flood of Fire "War veteran and journalist Roy Scranton combines memoir, philosophy, and science writing to craft one of the definitive documents of the modern era."--The Believer Best Books of 2015 Coming home from the war in Iraq, US Army private Roy Scranton thought he'd left the world of strife behind. Then he watched as new calamities struck America, heralding a threat far more dangerous than ISIS or Al Qaeda: Hurricane Katrina, Superstorm Sandy, megadrought--the shock and awe of global warming. Our world is changing. Rising seas, spiking temperatures, and extreme weather imperil global infrastructure, crops, and water supplies. Conflict, famine, plagues, and riots menace from every quarter. From war-stricken Baghdad to the melting Arctic, human-caused climate change poses a danger not only to political and economic stability, but to civilization itself ...and to what it means to be human. Our greatest enemy, it turns out, is ourselves. The warmer, wetter, more chaotic world we now live in--the Anthropocene--demands a radical new vision of human life. In this bracing response to climate change, Roy Scranton combines memoir, reportage, philosophy, and Zen wisdom to explore what it means to be human in a rapidly evolving world, taking readers on a journey through street protests, the latest findings of earth scientists, a historic UN summit, millennia of geological history, and the persistent vitality of ancient literature. Expanding on his influential New York Times essay (the #1 most-emailed article the day it appeared, and selected for Best American Science and Nature Writing 2014), Scranton responds to the existential problem of global warming by arguing that in order to survive, we must come to terms with our mortality. Plato argued that to philosophize is to learn to die. If that's true, says Scranton, then we have entered humanity's most philosophical age--for this is precisely the problem of the Anthropocene. The trouble now is that we must learn to die not as individuals, but as a civilization. Roy Scranton has published in the New York Times, Wall Street Journal, Rolling Stone, Boston Review, and Theory and Event, and has been interviewed on NPR's Fresh Air, among other media.
Visa hela texten

More praise for Learning to Die in the Anthropocene: "Roy Scranton gets it. He knows in his bones that this civilization is over. He knows it is high time to start again the human dance of making some other way to live. In his distinctive and original way he works though a common cultural inheritance, making it something fresh and new for these all too interesting times. This compressed, essential text offers both uncomfortable truths and unexpected joy."--McKenzie Wark, author of Molecular Red: Theory for the Anthropocene "We're f*cked. We know it. Kind of. But Roy Scranton in this blistering new book goes down to the darkness, looks hard and doesn't blink. He even brings back a few, hard-earned slivers of light... What is philosophy? It's time comprehended in thought. This is our time and Roy Scranton has had the courage to think it in prose that sometimes feels more like bullets than bullet points."--Simon Critchley, Co-founder and moderator of The New York Times online philosophy series "The Stone" "An eloquent, ambitious, and provocative book."--Rob Nixon, author of Slow Violence and the Environmentalism of the Poor "Roy Scranton has written a howl for the Anthropocene--a book full of passion, fire, science and wisdom. It cuts deeper than anything that has yet been written on the subject."--Dale Jamieson, author of Reason in a Dark Time: Why the Struggle to Stop Climate Change Failed--And What It Means For Our Future "As a motivator, the concept Life hasn't been working out so great, hardwired as it is into the post-Neolithic drive to exist no matter what the quality of that existence. Life won't help you to live. Including ecological awareness in our political decisions means including as much death in as many different modes (psychic, philosophical, social) as we can manage. Roy Scranton has written an essential recipe book for adding some death to the bland, oppressive and ecologically disastrous human cake."--Timothy Morton, author of Ecology without Nature: Rethinking Environmental Aesthetics "In the brief but crowded pages of Learning to Die in the Anthropocene, Iraq War veteran, Roy Scranton, wields both history and philosophy as forensic tools. With the unblinking eyes of a medical examiner, he systematically reveals the causes, trajectory and outcome of our planetary domination and its subsequent climate crisis. Slicing away obscuring adipose tissue of romanticism on the left and denial on the right, he pinpoints the source of the corpse's demise."--Jose Knighton, Weller Book Works' Newsletter "Scranton has always been a few steps ahead of other veteran-authors... Learning to Die in the Anthropocene casts a beautiful allure."--Peter Molin, Time Now "Scranton's book has its own kind of power... There is something cathartic about his refusal to shy away from the full scope of our predicament."--Rebecca Tuhus-Dubrow, The Los Angeles Review of Books "This is a small book with big ideas from an Army veteran who views the flooding after Hurricane Katrina and sees 'the same chaos and collapse I'd seen in Baghdad.' Scranton brings meaning and humor to the mayhem."--J. Ford Huffman, The Military Times "With clarity and conviction, Scranton explores the global failure to address the climate crisis and the possibility that the planet could become uninhabitable. Referring to classic texts as far back as The Epic of Gilgamesh, he urges readers to face their fear of death and find guidance in literature as they prepare for and adapt to the future. The book is an unapologetic punch in the gut, likely to leave many readers gasping. Scranton does offer a kind of hope: By making tough accommodations and reconnecting with our core humanity, we may eventually be able to recover our collective breath."--Michael Berry, Sierra Magazine " ... Scranton's book is a very well researched investigation into our troubled future.

A war veteran, journalist, and author, Roy Scrantonhas published in the New York Times, Wall Street Journal, Rolling Stone, Boston Review, and Theory and Event, and has been interviewed on NPR's Fresh Air, among other media.