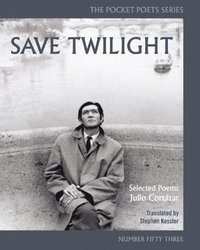 av Julio Cortazar
Häftad Engelska, 2016-08-25
199
Bevaka
Spara som favorit
Tillfälligt slut – klicka "Bevaka" för att få ett mejl så fort boken går att köpa igen.
One of Publishers Weekly's Most Anticipated Books for Fall 2016 "Cortazar's verse is more traditional than his fiction, but his style and themes are in harmony across genres: eccentric, mystical, full of animals but deeply human. Cortazar is a people's poet, accessible from every angle, and his position as a titan of the Latin American boom is indisputable."--Publishers Weekly, starred review World renowned as one of the masters of modern fiction, Julio Cortazar was also a prolific poet. While living in Paris during the last months of his life, Cortazar assembled his life's work in verse for publication, and Save Twilight selects the best of that volume, making his poems available in English for the very first time. This expanded edition, with nearly one hundred new pages of poems, prose and illustrations, is a book to be savored by both the familiar reader and the newcomer to Cortazar work. Ranging from the intimate to the political, tenderness to anger, heartbreak to awe, in styles both traditionally formal and free, Cortazar the poet and subverter of genres is revealed as a versatile and passionate virtuoso. More than a collection of poems, this book is a playful and revealing self-portrait of a writer in love with language in all its forms. Praise for Save Twilight: "With this expanded edition of Save Twilight, Stephen Kessler continues his project, begun in the 1980s, of translating poetry by Julio Cortazar. Widely known for his fiction, especially Hopscotch, a seminal work of the Latin American Boom, Cortazar was also a compelling poet. Kessler has found just the right turns of phrase in English to capture the Argentine's deeply moving writing and exceptionally emotive language. What a gift this collection is for English-speaking readers."--Edith Grossman, winner of the PEN/Ralph Manheim Medal for Translation "Some people run the world, others are the world. Cortazar's poems are the world; they have a special consideration for the unknown."--Enrique Vila-Matas, author of The Illogic of Kassel "What a pleasure, this walk in a well-orchestrated park with shades as complex, as light & as dark, as multifoliate as the actual world! This book--the 'poetic ecology' Cortazar had envisioned--is an open invitation to make yourselves at home twixt sea and loss, wine & sorrow, birth & riptide, tobacco & talk, laughter & death. Nothing human is foreign to the poet--& he brings it home with great clarity & grace. The writing & the book embody a tradition of hospitality, or as Cortazar puts it: 'Hello little black book for the late hours, cats on the prowl under a paper moon.' The injunction to save twilight stands as title--it is also exactly what the writing accomplishes. Stephen Kessler's elegant, accurate, and sometimes felicitously ose translations do these poems more than justice."--Pierre Joris, author of Barzakh (Poems 2000-2012) "For those who have enjoyed Cortazar's fiction, among the most seminal and compelling of our time, here now are his wonderful poems. And for those who don't know Cortazar from a cat, it's a chance to visit his crepuscular world in all its multiple layers. A tender, experimental, humorous, meditative, jazzy, heart-breaking collection to be relished and savored slowly." --Ariel Dorfman, author of Feeding on Dreams: Confessions of an Unrepentant Exile Julio Cortazar was born in Brussels in 1914 of Argentinian parents, raised in Argentina, and spent his most productive years in Paris, where he died in 1984.
Visa hela texten

"Argentine writer and translator Cortazar (1914--1984), best known for his inventive fiction, beguiles in this expanded bilingual second edition of his poems. Cortazar, espousing the notion that 'poetry and prose reciprocally empower each other,' constructs hybrid 'prosems' or 'peoms' that contend with love and loss, nationalistic ambivalence, literary theory, and memory. Something of a lovable crank, he declares listening to headphones 'stupid and alienating' and a 'psychological prison' in a lyrical essay ostensibly in favor of them, and heaps inexplicable scorn on knitters and Notre Dame Cathedral. Cortazar pithily laments his own squareness--'I accept this destiny of ironed shirts'--and the aging process, during which time is 'a truckload of rocks/ dumped on your back, puking/ its insufferable weight.' A political expatriate to Paris, Cortazar footnotes one poem praising Argentina with an ominous implication of state-sanctioned murder, while elsewhere he fondly recalls 'wisps of smoke/ gracefully streaming from the peanut vendors' carts' in the Plaza de Mayo. Cortazar's verse is more traditional than his fiction, but his style and themes are in harmony across genres: eccentric, mystical, full of animals but deeply human. Cortazar is a people's poet, accessible from every angle, and his position as a titan of the Latin American boom is indisputable."--Publishers Weekly, starred review "When City Lights was preparing to publish the first edition of Julio Cortazar's poetry in English in 1997 (it's number fifty-three in the Pocket Poets series), [Lawrence] Ferlinghetti wanted to produce a lean volume. In doing so, he cut the essay 'For Listening Through Headphones,' which Cortazar begins by mourning the 'pre-echo' on some records that mars 'the brief night of the ears as they get ready for the fresh irruption of sound.' It's funny that an essay that more than once uses the play of light and darkness to illuminate sound would be omitted from a book titled Save Twilight. But this month, City Lights is reissuing the volume, now heftier, thanks in part to the restoration of 'For Listening' (and other poems that were left out from the original). In addition to being mesmerizing and utterly gorgeous ('now the needle / runs through the former silence and focuses it / in a black plush ... a phosphene silence'), the essay links the experience of hearing music through headphones to poetry's innate intimacy: 'How not to think, then, that somehow poetry is a word heard through invisible headphones as soon as the poem begins to work its spell.'"--Nicole Rudick, The Paris Review "These faithful old (and new) translations bring the poetic playfulness of this vitally important writer into engaging English life, and they promise to keep us looking into the vitrines of his poems so intently that we might well find ourselves looking back out from them, at blank faces, once familiarly our own and now estranged, looking quizzically back at us."--The Massachusetts Review "Many poems and writings in this collection make it essential for any fans of Cortazar's fiction, and a few, such as 'To Be Read in the Interrogative,' the most instantly arresting poem here, make it equally accessible to first-time Cortazar readers."--Literal Magazine "City Lights Books keeps current for reasons that could fill a book, including the fact that its editors have always had a special instinct for what needs to stay in print, what needs a hiatus, what should be reissued and when, and what should be acquired because it is irresistible and as good as its elders. Save Twilight: Selected Poems by Julio Cortazar is a collection of old and new translations by Stephen Kessler, and it fits right into the City Lights ethos. Kessler is a distinguished translator, and this bi-lingual edition does justice to the masterful Cortazar ... In praising Save Twilight, qualifiers like 'seem' are unnecessary, because what the book provides is en

Julio Cortazar was born in Brussels in 1914 to Argentinian parents and raised in Argentina, where as a young man he worked as a secondary-school teacher, university professor, and professional translator. In 1951 he moved to Paris, where he earned his primary living as a translator for UNESCO. He is regarded internationally as a modern master of the short story and his novel Hopscotch is considered a seminal work of the Latin American fiction "boom" of the 1960s. Cortazar's other books in English include Blow-Up and Other Stories, 62: A Model Kit, The Winners, All Fires the Fire, A Manual for Manuel, Cronopios and Famas, A Change of Light, We Love Glenda So Much, A Certain Lucas, Unreasonable Hours, and Around the Day in Eighty Worlds. He died in Paris in 1984. Stephen Kessler is a poet, prose writer, translator, and editor. He is the author of ten books and chapbooks of original poetry, sixteen books of literary translation, and three collections of essays. His most recent books are Where Was I? (prose poems/memoirs), Need I Say More? (essays) and Forbidden Pleasures (new selected poems of Luis Cernuda, translation). He is also the author of a novel, The Mental Traveler, the editor and principal translator of The Sonnets by Jorge Luis Borges, and from 1999 through 2014 was the founder and editor of The Redwood Coast Review, four-time winner of the California Library Association's PR Excellence Award. His other awards include a Lambda Literary Award and the Harold Morton Landon Translation Award from the Academy of American Poets for his previous translations of Luis Cernuda, Written in Water and Desolation of the Chimera.