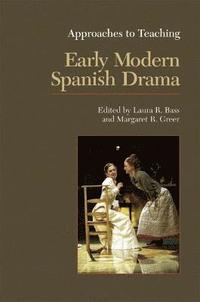 av Modern Language Association
Häftad Engelska, 2006-01-01
239
Köp
Spara som favorit
Finns även som
Visa alla 1 format & utgåvor
At the start of the twenty-first century, performances of early modern Spanish drama experienced resurgent popularity-not only in Spain but also on stages across Europe, Latin America, and the United States. In the academy the comedia, which includes comic, tragicomic, and tragic works, is widely taught in a range of contexts to a variety of students, in Spanish and in translation. Given the steady increase of Spanish as the language of choice in foreign language departments, these courses will continue to flourish. This volume offers guidance to teachers in helping students engage with and understand these late-sixteenth- and early-seventeenth-century works. Part 1, "Materials," evaluates editions and anthologies in English and Spanish; identifies important critical works and historical studies; and surveys illustrated books, films, and Internet resources. In part 2, "Approaches," experienced teachers discuss the way the plays challenged the interests of the monarchial state; examine the obsession with honor shared by Spanish men and women alike; explain the key role costume played in providing both pleasure and meaning; and explore how late-twentieth-century films reflect elements of these early Spanish plays. Other approaches center on five women playwrights; delve into the complex theological and philosophical underpinnings of the plays; pair the plays with Shakespearean drama; show how Spanish plays influenced French dramatists; and trace the appeal of the Don Juan figure.
Visa hela texten

"This volume represents a timely and welcome teaching resource to scholars of early modern Spanish theater. It is an intelligently prepared and worthy addition to the MLA Approaches to Teaching series." --Maria Cristina Quintero, Bryn Mawr College

Laura R. Bass is assistant professor at Tulane University. She teaches courses on early modern Spanish and colonial Latin American literature, art, and culture and has won awards for her work in the classroom. She has published articles on literature from the fifteenth through the seventeenth centuries. Her book manuscript "The Drama of the Portrait: Theater and Visual Culture in Early Modern Spain" is currently under review. Margaret R. Greer is chair and professor of Spanish in the Department of Romance Studies, Duke University. Her publications include Maria de Zayas Tells Baroque Tales of Love and the Cruelty of Men; The Play of Power: Mythological Court Drama of Pedro Calderon de la Barca; and two editions of Calderon plays. She is working on books on early modern Spanish tragedy and on hunting in Spanish and colonial literature, art, and law.