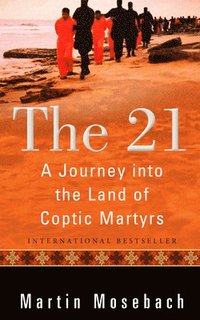 A Journey into the Land of Coptic Martyrs

av Martin Mosebach
Inbunden Engelska, 2019-02-15
249
Köp
Spara som favorit
Skickas inom 5-8 vardagar.
Gratis frakt inom Sverige över 159 kr för privatpersoner.
Finns även som
Visa alla 1 format & utgåvor
Behind a gruesome ISIS beheading video lies the untold story of the men in orange and the faith community that formed these unlikely modern-day saints and heroes. In a carefully choreographed propaganda video released in February 2015, ISIS militants behead twenty-one orange-clad Christian men on a Libyan beach. In the West, daily reports of new atrocities may have displaced the memory of this particularly vile event. But not in the world from which the murdered came. All but one were young Coptic Christian migrant workers from Egypt. Acclaimed literary writer Martin Mosebach traveled to the Egyptian village of El-Aour to meet their families and better understand the faith and culture that shaped such conviction. He finds himself welcomed into simple concrete homes through which swallows dart. Portraits of Jesus and Mary hang on the walls along with roughhewn shrines to now-famous loved ones. Mosebach is amazed time and again as, surrounded by children and goats, the bereaved replay the cruel propaganda video on an iPad. There is never any talk of revenge, but only the pride of having a martyr in the family, a saint in heaven. "The 21" appear on icons crowned like kings, celebrated even as their community grieves. A skeptical Westerner, Mosebach finds himself a stranger in this world in which everything is the reflection or fulfillment of biblical events, and facing persecution with courage is part of daily life. In twenty-one symbolic chapters, each preceded by a picture, Mosebach offers a travelogue of his encounter with a foreign culture and a church that has preserved the faith and liturgy of early Christianity - the "Church of the Martyrs." As a religious minority in Muslim Egypt, the Copts find themselves caught in a clash of civilizations. This book, then, is also an account of the spiritual life of an Arab country stretched between extremism and pluralism, between a rich biblical past and the shopping centers of New Cairo.
Visa hela texten

Martin Mosebach is a superb journalist. Virtually nothing escapes his gaze, and he glosses over nothing. --Hannes Stein, Die Welt Few contemporary writers have delved so deeply into the disturbing experiences of such an entirely different world and way of life. --HR 2 Mosebach has a novelist's insight and way with words. The 21 is also a fine piece of journalism. It helps us to understand, if not the ferocity of the killers, the quiet heroism--the ordinary heroism, perhaps--of the martyrs.--Christian Today Although I would like very much to visit Egypt, I think I never would have seen all the things Mosebach was able to see. What he has written is a meditation on the profound sense of prayer he found in the Coptic Church, the depth of mystery in her liturgy, the valor of the witness of a minority that has been persecuted for 1,400 years, the reality of faith to be experienced in the poor and the powerless.--Msgr. Richard Antall, Angelus News Mosebach provides striking images of a singular Christianity unfamiliar to many Christians outside of the Middle East.... Through immersive scenes and finely drawn portraits of the people he meets, he exhibits a clear admiration for the Coptic devotion on every page. This will appeal to Christians as well as readers wanting to understand the lives of minorities in Muslim countries.--Publishers Weekly Richly rewarding... In a strikingly brief space, Mosebach has much to tell us about each of the martyrs as individuals and about their families. The 21 is also deeply informative about the state of Coptic Egypt, and about martyrdom, and even about Coptic liturgy. The book's only flaw is that it is so emotionally moving that it is difficult to read without frequent breaks.--Philip Jenkins, Christian Century Martin Mosebach is undoubtedly one of the most intelligent, original, and powerfully eloquent poets of the present day. --Ulrich Greiner, Die Zeit In this remarkable book, Mosebach doesn't simply avoid the standard Western narratives but turns the tables on them. He is not interested in providing a lurid account of barbarities from which we, in our secular sophistication, are immune, or in explaining away the miracles in the lives of the devout poor, or, still less, in telling us how to regard radical Islam, formulate a foreign policy for the Middle East, or help persecuted Christians abroad, much as they could use our help. Rather, he wants to show Christians - in the West and elsewhere - what these migrant workers can teach us about living our own faith.--Commonweal Magazine Mosebach has mastered a rare art: maintaining deep respect for the other. . . . Not a single detail loses its magic in this moving, impressive book: it reads like a ray of light, illuminating Western blind spots and foreign worlds. --Alexander Cammann, Die Zeit Take[s] us deep into the lives and churches of these Coptic believers, with Mosebach exhibiting an attention to detail befitting his novelistic gifts....We gain a rich impression of what shaped the lives and faith of these martyrs, and we witness how their martyrdom reverberates to this day through their families, churches, and communities.--Christianity Today Mosebach asks us to not look away but rather to look directly into the faces and lives of these martyrs. By doing so we of the lands of plenty and waning faith may find something that we have lost and may yet regain...but not without cost.--Cornerstone Forum

Martin Mosebach passed his bar exams to qualify as a lawyer in 1979, and then established himself as a writer. His first novel was published in 1983. Since then, he has received many accolades, including the Heinrich von Kleist Prize, the Georg Buchner Prize, and the Goethe Award. Alta L. Price runs a publishing consultancy specialized in literature and nonfiction texts on art, architecture, history, and culture. A recipient of the Gutekunst Prize, she translates from Italian and German into English.