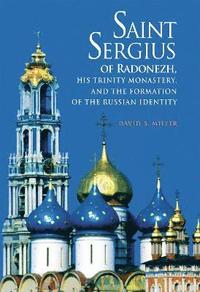 Saint Sergius of Radonezh, His Trinity Monastery, and the Formation of the Russian Identity

av David B Miller
Inbunden Engelska, 2010-11-05
429
Köp
Spara som favorit
Skickas inom 10-15 vardagar.
Fri frakt inom Sverige för privatpersoner.
When Sergius of Radonezh founded a monastery near Moscow, his example spawned a movement of monastic foundations throughout Russia. Within three decades of his death in 1392, Sergius was recognized as a saint, and by 1450 many considered him the intercessor for the Russian land who freed its people from Mongol rule. Over the next century and a half, thousands sought St. SergiusAEs intercession with gifts to the monastery. MoscowAEs rulers made Sergius patron saint of their dynasty and of the Russian tsardom. By 1605, the Trinity-Sergius monastery was the biggest house in Russia.Miller presents TrinityAEs dramatic history from the 14th century to the beginning of the Time of Troubles. Using extensive archival materials, he traces the evolution of TrinityAEs relationship to SergiusAEs venerators and its traditions, governance, social composition, and the lifestyle of its members. In lucid prose, Miller argues that St. SergiusAEs cult and monastery became integrating forces on a national scale and vital elements in the forging of a Russian identity, economy, and cohesive society. The power of religion to shape national identity is a lively topic today, and MillerAEs study will interest both medievalists and modern historians, as well as readers of Orthodox Church history.
Visa hela texten

"The most impressive monograph in a Western language to date about a pre-modern Russian saint and his foundation ... Sergius was arguably the single most important, native, seminal figure in the flourishing of Russian rural and urban monasticism over most of these years."--David Goldfrank, Georgetown University "An extraordinarily multi-faceted portrait of the transformation of a small religious community established by a simple monk in the fourteenth century into a national spiritual center built around the burgeoning reputation of its founder as a miracle-working saint empowered by the special assistance of the protection of the Mother of God."--Ann Kleimola, University of Nebraska-Lincoln "A comprehensive survey of the subject. It conjures a clear picture of a major Russian saint and a major institution in the Russian religious, economic and social life of the late Middle Ages."--Pierre Gonneau, University of Paris-Sorbonne

David B. Miller is Emeritus Professor of Russian History at Roosevelt University in Chicago. He wrote the chapter \u201cThe Orthodox Church\u201d in The Cambridge History of Russia, vol. 1 (2006).