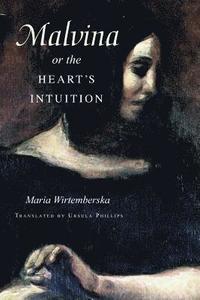 Malvina, or the Heart's Intuition

av Maria Wirtemberska
Häftad Engelska, 2012-05-11
169
Köp
Spara som favorit
Skickas inom 10-15 vardagar.
Fri frakt inom Sverige för privatpersoner.
First published in Warsaw in 1816, Malvina, or the Heart's Intuition has been largely-and unjustly-ignored by the Polish literary canon. Ingeniously structured and vividly related by a Tristram Shandy-esque narrator, Maria Wirtemberska's psychologically complex work is often considered Poland's first modern novel. This splendid translation by Ursula Phillips should restore Wirtemberska to her rightful place in the literary pantheon while providing fertile new ground for the study of the international development of the novel. The romantic story of the young widow Malvina and her mysterious lover Ludomir, Malvina combines several literary styles and influences-from the epistolary to the Gothic. Nobel laureate Czeslaw Milosz argues that Malvina is quintessentially a sentimental novel-a model of the genre whose chief aspiration is to promote a change in sensibility and inspire new forces of feeling and imagination. For this reason Wirtemberska may be compared to her English contemporary, Jane Austen. A work of genuine artistic daring and sophistication, Malvina, or the Heart's Intuition has been overlooked by critics for too long, and readers have been denied the pleasure of reading one of literature's major landmarks-until now.
Visa hela texten

"Wirtemberska [is] one of the first figures in a now rich tradition of Polish literature written by women. Indeed, Wirtemberska's book remains interesting to this day. . . . Phillips's exceptionally careful translation . . . is original and as graceful as any alternative that comes to mind. . . . [Anyone] with an interest in the novel taking root as a genre or in the early nineteenth-century novel will appreciate this book." --Slavic and East European Journal "The novel's freshness and verve are faithfully rendered in Ursula Phillips's excellent, seamless translation. Here the vocabulary of feeling hits its mark and helps make Malvina a contribution to a renewed forging of Polish identity." --Times Literary Supplement

Maria Wirtemberska (1768-1854) was a Polish noblewoman and philanthropist in addition to being a writer. Ursula Phillips is a writer on Polish literature, mainly in the field of women's writing, gender and feminism, and also a translator of literary and academic works, including The Palace by contemporary novelist Wieslaw Mysliwski, historian Antoni Maczak's Travel in Early Modern Europe, Grazyna Borkowska's Alienated Women and the recent research project Humanism in Polish Culture. She is Honorary Research Associate of the University College London School of Slavonic and East European Studies.

Preface Introduction Malvina, or the Heart's Intuition To My Brother Volume One 1. Thunder and Lighting 2. Ludomir's Letter to Telimena 3. In which the Reader Learns more Clearly who Malvina was 4. Wanda's Letter to her Aunt 5. Aunty 6. The Name-Day Celebration 7. Declaration of Love 8. Ludomir's Second Letter to Telimena 9. Departure 10. A Very Brief Chapter 11. Warsaw 12. The Continuation of Malvina's Stay in Warsaw 13. Evening at Princess W***'s 14. Charity Collecting Volume Two 15. Taida 16. In Brief 17. Alfred's Letter to Major Lissowski 18. The Return of Prince Melsztynski 19. The Tournament 20. The Apparition 21. A Rather Miserable Chapter 22. Departure from Warsaw 23. The Battle of Mohilew 24. In which Certain Unexpected Changes Take Place 25. The Monk 26. The Heart, however, Rarely Makes a Mistake 27. The Bench under the Chestnut on the Dike 28. The End