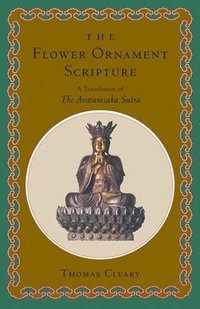 A Translation of the Avatamsaka Sutra

av Thomas Cleary
Inbunden Engelska, 1993-10-01
1089
Köp
Spara som favorit
Skickas inom 5-8 vardagar.
Gratis frakt inom Sverige över 159 kr för privatpersoner.
Finns även som
Visa alla 1 format & utgåvor
Known in Chinese as "Hua-yen" and in Japanese as "Kegon-kyo," the "Avatamsaka Sutra," or "Flower Ornament Scripture," is held in the highest regard and studied by Buddhists of all traditions. Through its structure and symbolism, as well as through its concisely stated principles, it conveys a vast range of Buddhist teachings. This one-volume edition contains Thomas Cleary's definitive translation of all thirty-nine books of the sutra, along with an introduction, a glossary, and Cleary's translation of Li Tongxuan's seventh-century guide to the final book, the "Gandavyuha," "Entry into the Realm of Reality."
Visa hela texten

"There is no doubt in my mind that Thomas Cleary is the greatest translator of Buddhist texts from Chinese or Japanese into English of our generation, and that he will be so known by grateful Buddhist practitioners and scholars in future centuries. Single-handedly he has gone a long way toward building the beginnings of a Buddhist canon in English. . . . His translation of the Flower Ornament Sutra from Shikshananda's Chinese translation of the Sanskrit is one of the monuments in Buddhist Studies of our time."--Robert A. F. Thurman, Tricycle <br>"As to the Avatamsaka-Sutra, it is really the consummation of Buddhist thought, Buddhist sentiment, and Buddhist experience. To my mind, no religious literature in the world can ever approach the grandeur of conception, the depth of feeling, and the gigantic scale of composition, as attained by the sutra. Here not only deeply speculative minds find satisfaction, but humble spirits and heavily oppressed hearts, too, will have their burdens lightened. Abstract truths are so concretely, so symbolically represented here that one will finally come to a realization of the truth that even in a particle of dust the whole universe is seen reflected--not this visible universe only, but a vast system of universes, conceivable by the highest minds only."--D. T. Suzuki