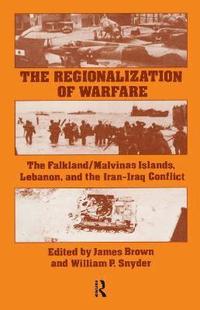 The Regionalization of Warfare

The Falkland/Malvinas Islands, Lebanon, and the Iran-Iraq Conflict

av James Brown
Häftad Engelska, 1985-01-01
499
Köp
Spara som favorit
Skickas inom 7-10 vardagar.
Gratis frakt inom Sverige över 159 kr för privatpersoner.
Finns även som
Visa alla 1 format & utgåvor
Three wars have dominated world events in recent years: The conflict which erupted between the United Kingdom and Argentina over the Falkland/Malvinas Islands; the multinational conflict in Lebanon involving Irsaeli, Syrian, and FLO forces in Lebanon; and the savage struggles between ground and air units of the Iranian and Iraqi forces. The scale and intensity of these wars, their potential for global conflict, make them crucial for an understanding among citizens in general, and defense and political analysts in particular.The authors and contributors to this most unusual volume come to several common conclusions: professionalism is a crucial factor in military effectiveness, but not necessarily dependent on modes of recruitment; high technology is crucial, but only in relation to the quality and training of the personnel; public support is necessary to sustain military morale in democratic and authoritarian regimes alike. These are only some of the incisive findings registered and explored in The Regionalization of Warfare.The volume a'ssembles experts not only on these three major regional and interregional conflicts, but on current U.S. defense policies; Soviet strategic interests in Middle East and Persian Gulf conflicts; and a series of papers on lessons learned and unlearned as a result of these "small wars" of the early 1980s. For those interested in military history, global strategy, and regional rivalries, this -collection of finely written, sophisticated papers will prove to be of intense concern.
Visa hela texten

James Brown is professor of political science, Southern Methodist University. His doctoral degree in political science is from the State University of New York at Buffalo. He has written extensively on national security policy and civil-military relations in Greece and Turkey, and his work has appeared in Armed Forces and Society; Air University Review; the International Journal of Public Administration; Polity, etc. Professor Brown is associate chairman of the Inter-University Seminar on Armed Forces and Society and a fellow of the Royal United Services Institute.