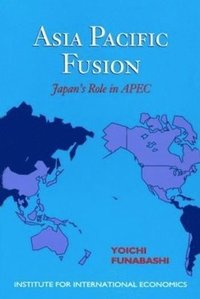 av Funabashi Yoichi
Häftad Engelska, 1995-10-01
219
Köp
Spara som favorit
Japanese journalist Yoichi Funabashi has written the first in-depth study of the Asia Pacific Economic Cooperation (APEC) forum based on extensive interviews with heads of state and government officials in the region. A key force behind APEC, he argues, is a potential "fusion" of Asia-Pacific civilizations propelled by the region s dynamic economic integration. He recounts APEC s six-year history, assesses its potential, and examines the power politics of the region. Released just before the Osaka summit hosted by Japan in November 1995, this book looks closely at Japan's interests in APEC and its relations with countries in the region. It provides an intellectual framework for the future evolution of APEC itself and for Japan's role in that institution.
Visa hela texten

Funabashi Yoichi is the Chairman of the Rebuild Japan Initiative Foundation and former editor-in-chief and columnist for the Asahi Shimbun. He is also a contributing editor of Foreign Policy. In 1985 he received the Vaughn-Ueda Prize for his reporting on international affairs. He won the Japan Press Award, Japan's "Pulitzer Prize," in 1994 for his columns on foreign policy.