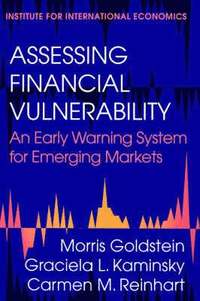 av Morris Goldstein, Graciela L Kaminsky, Carmen M Reinhart
Häftad Engelska, 2000-04-01
179
Köp
Spara som favorit
The European currency crises of 1992-93, the Mexican crisis of 1994-95, and especially the Asian/global crisis of 1997-98, have all contributed to a heightened interest in the early warning signals of financial crises. This pathbreaking study presents a comprehensive battery of empirical tests on the performance of alternative early warning indicators for emerging-market economies that should prove useful in the construction of a more effective global warning system. Not only are the authors able to draw conclusions about which specific indicators have sent the most reliable early warning signals of currency and banking crises in emerging economies, they also test the out-of-sample performance of the model during the Asian crisis and find that it does a good job of identifying the most vulnerable economies. In addition, they show how the early warning system can be used to construct a "composite" crisis indicator to weigh the importance of alternative channels of cross-country "contagion" of crises, and to generate information about the recovery path from crises. This timely study comes on the eve of impending changes at the International Monetary Fund as that institution reexamines how it reacts to financial crises. Moreover, the study provides "...a wealth of valuable elements for anyone investigating and forecasting adverse developments in emerging markets as well as industrial countries," according to Ewoud Schuitemaker, vice president of the economics department at ABN AMRO Bank.
Visa hela texten

I am convinced that it will contribute to developing an early warning system needed so much to avoid severe emerging markets crises in the future. -- Rolf E. Breuer, Deutsche Bank [Provides] a definitive presentation of the 'early warning indicator' methodology for crisis prediction... Without a doubt, this is a book that I would want to have on my shelves. -- Peter Montiel, International Monetary Fund ...the best available effort to build an 'early warning system'. -- Barry Eichengreen, University of California, Berkeley

Morris Goldstein, nonresident senior fellow, has held several senior staff positions at the International Monetary Fund (1970-94), including Deputy Director of its Research Department (1987-94). From 1994 to 2010, he held the Dennis Weatherstone Senior Fellow position at the Peterson Institute. He has written extensively on international economic policy and on international capital markets. Carmen M. Reinhart was the Dennis Weatherstone Senior Fellow at the Peterson Institute for International Economics. She was previously professor of economics at the University of Maryland. Graciela L. Kaminsky is professor of Economics and International Affairs at George Washington University and Research Associate at the National Bureau of Economic Research. She previously held positions as assistant professor at the University of California, San Diego and staff economist at the Board of Governors of the Federal Reserve System. She has been a Visiting Scholar at numerous government organizations, including the Bank of Japan, the Bank of Spain, the Federal Reserve Bank of New York, the Hong Kong Monetary, and the Monetary Authority of Singapore.