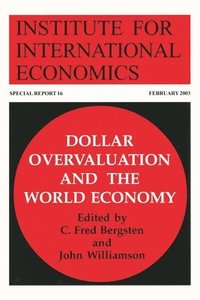 Dollar Overvaluation and the World Economy

av C Fred Bergsten, John Williamson
Häftad Engelska, 2003-01-01
219
Köp
Spara som favorit
Finns även som
Visa alla 1 format & utgåvor
The dollar rose by about 35 percent in real terms from 1995 through the end of 2001, supporting the booming US economy of the late 1990s but pushing the current account deficit to a record high of almost 5 percent of GDP. This special report provides alternative views of how large a dollar depreciation would be needed to restore a sustainable position (Jim O'Neill, Michael Rosenberg, and Catherine Mann), analyzes the impact of currency misalignments on each of the three major economies (Martin Baily for the United States, William Cline for Japan, and Daniel Gros for Euroland), and discusses the role of exchange market intervention in addressing the issues (Kathryn Dominguez, Edwin M. Truman, and Ernest Preeg).
Visa hela texten

C. Fred Bergsten, senior fellow and director emeritus, was the founding director of the Peterson Institute for International Economics (formerly the Institute for International Economics) from 1981 through 2012. He is serving his second term as a member of the President's Advisory Committee for Trade Policy and Negotiations and was co-chairman of the Private Sector Advisory Group to the United States-India Trade Policy Forum, comprising the trade ministers of those two countries, during 2007-14. John Williamson, senior fellow (retired), was associated with the Institute from 1981 to 2012. He was project director for the UN High-Level Panel on Financing for Development (the Zedillo Report) in 2001; on leave as chief economist for South Asia at the World Bank during 1996-99; economics professor at Pontifica Universidade Catolica do Rio de Janeiro (1978-81), University of Warwick (1970-77), Massachusetts Institute of Technology (1967, 1980), University of York (1963-68), and Princeton University (1962-63); adviser to the International Monetary Fund (1972-74); and economic consultant to the UK Treasury (1968-70).