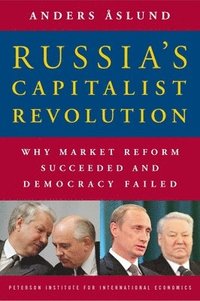 av Anders Aslund
Häftad Engelska, 2007-10-01
389
Köp
Spara som favorit
The Russian revolution, collapse of the Soviet Union, and Russia's ensuing transformation belong to the greatest dramas of our time. Revolutions are usually messy and emotional affairs, challenging much of the conventional wisdom, and Russia's experience is no exception. This book focuses on the transformation from Soviet Russia to Russia as a market economy, and explores why the country has failed to transform into a democracy. It examines the period from 1985, when Mikhail Gorbachev became the Soviet Union's Secretary General of the Communist Party, to the present Russia of Vladimir Putin. Aslund provides a broad overview of Russia's economic change, highlighting the most important issues and their subsequent resolutions, including Russia's inability to sort out the ruble zone during its revolution, several failed coups, and the financial crash of August 1998.
Visa hela texten

The central paradox about contemporary Russia is why capitalism has taken root, but democracy has not. Aslund provides a crisp, comprehensive, and compelling answer. Russia's Capitalist Revolution will become a classic overnight. -- Michael McFaul,, Director, Center on Democracy, Development, and Rule of Law, Freeman Spogli Institute for International Studies, Stanford University This book depicts accurately and elegantly the manifold and complete collapse of the Soviet Union. Aslund clarifies the many components necessary for carrying out reforms. Like few others, he understands the importance of a strong reform team. -- Yegor T. Gaidar, former prime minister of Russia Anders Aslund's Russia's Capitalist Revolution is an exceptionally well-informed account of Russia's tortuous evolution since the reforms of Gorbachev. -- Richard Pipes, Frank B. Baird, Jr. Professor of History Emeritus, Harvard University

Anders Aslund was a senior fellow at the Peterson Institute for International Economics from 2006 to May 2015. He examined the economic policies of Russia, Ukraine, and Eastern Europe, as well as the broader implications of economic transition. Aslund served as an economic adviser to the governments of Russia in 1991-94 and Ukraine in 1994-97.