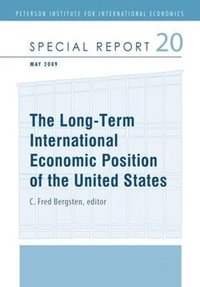 The Long-Term International Economic Position of the United States

av C Fred Bergsten
Häftad Engelska, 2009-06-01
159
Köp
Spara som favorit
This Special Report looks at the long-run prospects for the international economic position of the United States, with particular focus on the likely evolution of the current account deficit and prospective foreign financing for it. Its goal is to provide a fundamental framework for the development of US fiscal and other economic policies, especially including responses to the global financial and economic crisis of 2008-09. The central message is that the long-run outlook is extremely worrisome and potentially very costly-in foreign policy/national security as well as economic terms. As the country (and the world) emerges from the global crisis, and even in fashioning policy responses to the crisis itself, it will be essential to keep the long-run considerations firmly in mind. This will require early and decisive policy actions, perhaps even in tandem with the near-term stimulus and housing initiatives, to address the ever-escalating costs of the major entitlement programs, Social Security and especially Medicare/Medicaid, and thus the country's overall fiscal position.
Visa hela texten

C. Fred Bergsten, senior fellow and director emeritus, was the founding director of the Peterson Institute for International Economics (formerly the Institute for International Economics) from 1981 through 2012. He is serving his second term as a member of the President's Advisory Committee for Trade Policy and Negotiations and was co-chairman of the Private Sector Advisory Group to the United States-India Trade Policy Forum, comprising the trade ministers of those two countries, during 2007-14.

Introduction; The Global Crisis of 2008-09 and the International Economic Position of the United States; Chapter 2; Long-Term Fiscal Imbalances, US External Liabilities, and Future Living Standards; Chapter 3; International Capital Flows and the Sustainability of the US Current Account Deficit; Chapter 4; National Security Risks from Accumulation of Foreign Debt.