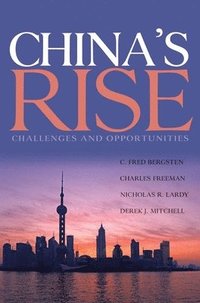 av C Fred Bergsten, Charles Freeman, Nicholas R Lardy, Derek J Mitchell
Häftad Engelska, 2009-10-15
185
Köp
Spara som favorit
Finns även som
Visa alla 1 format & utgåvor
China has emerged as an economic powerhouse (projected to have the largest economy in the world in a little over a decade) and is taking an ever-increasing role on the world stage. China's Rise: Challenges and Opportunities will help the United States and the rest of the world better comprehend the facts and dynamics underpinning China's rise-an understanding that becomes more and more important with each passing day. Additionally, the authors suggest actions both China and the United States can take that will not only maximize the opportunities for China's constructive integration into the international community but also help form a domestic consensus that will provide a stable foundation for such policies. Filled with facts for policymakers, this much anticipated book's narrative-driven, accessible style will appeal to the general reader. This book is unique in that it analyzes the authoritative data on China's economy, foreign and domestic policy, and national security. The expert judgments in this book paint a picture of a China confronting domestic challenges that are in many ways side effects of its economic successes, while simultaneously trying to take advantage of the foreign policy benefits of those same successes. China's Rise: Challenges and Opportunities from The China Balance Sheet Project, a joint, multiyear project of the Center for Strategic and International Studies and the Peterson Institute, discusses China's military modernization, China's increasing soft power influence in Asia and around the world, China's policy toward Taiwan, domestic political development, Beijing's political relations with China's provincial and municipal authorities, corruption and social unrest, rebalancing China's economic growth, the exchange rate controversy, energy and the environment, industrial policy, trade disputes, and investment issues. This book is part of the CSIS-IIE China Balance Sheet project. For more information about this project, please visit www.chinabalancesheet.org.
Visa hela texten

This is the best single book on China, and I use it to prepare for all my trips to that country. -- Zbigniew Brzezinski, former US National Security Advisor ...designed to clarify contemporary China and advise how U.S. 'engagement' with China may best move ahead. There's lots here, but clearly presented, with a great chronology. Library Journal There is no better place to find a compact overview of recent developments in China, through mid-2008, both with respect to economic developments and with respect to China's foreign and national security policy. -- Foreign Affairs

C. Fred Bergsten, senior fellow and director emeritus, was the founding director of the Peterson Institute for International Economics (formerly the Institute for International Economics) from 1981 through 2012. He is serving his second term as a member of the President's Advisory Committee for Trade Policy and Negotiations and was co-chairman of the Private Sector Advisory Group to the United States-India Trade Policy Forum, comprising the trade ministers of those two countries, during 2007-14. Nicholas R. Lardy, called "everybody's guru on China" by the National Journal, is a senior fellow at the Peterson Institute for International Economics. He joined the Institute in March 2003 from the Brookings Institution, where he was a senior fellow in the Foreign Policy Studies Program (1995-03) and served as interim director of Foreign Policy Studies (2001). Lardy has written numerous articles and books on the Chinese economy including Debating China's Exchange Rate Policy (2008), China: The Balance Sheet (2006), Prospects for a US-Taiwan Free Trade Agreement (2004), Integrating China into the Global Economy (2002), and China's Unfinished Economic Revolution (1998). Lardy is a member of the Council on Foreign Relations and is a member of the editorial boards of the China Quarterly, Journal of Asian Business, China Review, and China Economic Review. Charles Freeman is a nonresident senior adviser for economic and trade affairs at CSIS. Previously, he held the CSIS Freeman Chair in China Studies. A second-generation "China hand," he has lived and worked between Asia and the United States his entire life. Prior to joining CSIS, he served as assistant U.S. trade representative (USTR) for China affairs and was the United States' chief China trade negotiator, playing a primary role in shaping overall trade policy with respect to China, Taiwan, Hong Kong, Macao, and Mongolia. During his tenure as assistant USTR, he oversaw U.S. efforts to integrate China into the global trading architecture of the World Trade Organization. Earlier in his government career, he served as legislative counsel for international affairs in the Senate. Derek J. Mitchell served as senior fellow and director of the Asia Division of the International Security Program at the Center for Strategic and International Studies (CSIS). Mitchell concurrently served as founding director of the CSIS Southeast Asia Initiative, which was inaugurated in January 2008 and was the Center's first dedicated program to the study of Southeast Asian affairs.